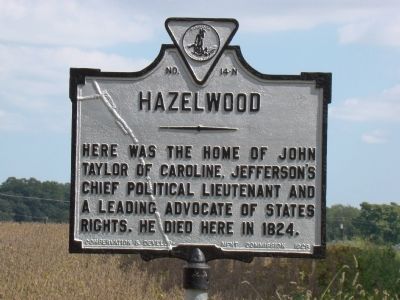 By J. J. Prats, September 19, 2009
1. Hazelwood Marker
Inscription.
Hazelwood. . Here was the home of John Taylor of Caroline, Jefferson’s chief political lieutenant and leading advocate of states rights. He died here in 1824. . This historical marker was erected in 1928 by Conservation and Development Commission. It is Near Port Royal in Caroline County Virginia

Here was the home of John Taylor of Caroline, Jefferson’s chief political lieutenant and leading advocate of states rights. He died here in 1824.

Topics. This historical marker is listed in these topic lists: Government & Politics • Notable Places. A significant historical year for this entry is 1824.

Other nearby markers. At least 8 other markers are within 2 miles of this marker, measured as the crow flies. Where Booth Died (approx. 1.7 miles away); The Sacred Lot (approx. 1.9 miles away); Old Port Royal (approx. 2 miles away); Dorothy Roy (approx. 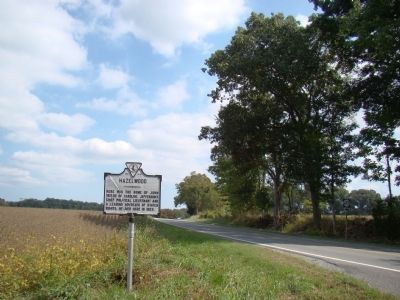 Also see . . .  John Taylor (1754–1824). Essay by Susan F. Sili. “How Taylor spent the balance of his years is best expressed by Marshall Wingfield in his history of Caroline County Virginia. ‘From 1776 to 1781 Taylor was member of the Virginia Legislature and as such added his strength to that of Richard Henry Lee, Patrick Henry, James Monroe and George Mason in firmly opposing the plans of Washington for a more perfect union and a more compact nation. For to understand the life and activities of John Taylor it must be constantly bourn in mind that he was a Virginian First and an American second.’ ” 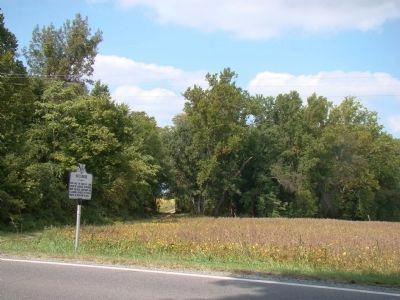 Editor’s want-list for this marker. Photos of Hazelwood, past and present • Can you help?
Share This Page.