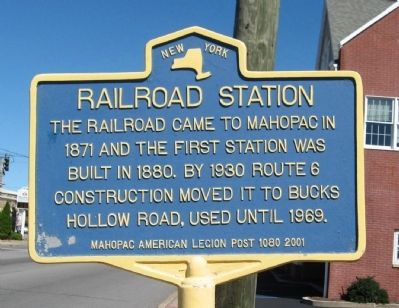 Photographed By Michael Herrick, September 19, 2009
1. Railroad Station Marker
Inscription.
Railroad Station. .
The railroad came to Mahopac in 1871 and the first station was built in 1880. By 1930 Route 6 construction moved it to Bucks Hollow Road, used until 1969. , Mahopac American Legion Post 1080 2001. . This historical marker was erected in 2001 by Mahopac American Legion Post 1080. It is in Mahopac in Putnam County New York

Topics. This historical marker is listed in this topic list: Railroads & Streetcars. A significant historical year for this entry is 1871. 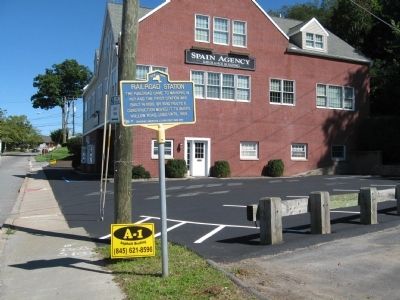 Click or scan to see
this page online
(approx. ¼ mile away); Knickerbocker Ice (approx. 0.3 miles away); Thompson House (approx. 0.4 miles away). Touch for a list and map of all markers in Mahopac.

Additional commentary.
1. Stagecoaches and Railroads to Lake Mahopac
At first, vacationers came here by stagecoach. One of the main roads to Mahopac was the old Peekskill Road, which went through Mahopac Falls and Shrub Oak. It is now called Route 6N.
After 1849, when the Harlem Railroad was built as far as Croton Falls, people came by train. They were met at the station by coaches belonging to the different hotels. The Gregory House coach was pulled by 10 white horses and the Baldwin House coach had 8 black horses. People came in the evening to see the exciting race as the coaches tried to beat each other back into town.
In 1871, the New York City and Northern Railroad built its tracks all the way to Carmel. The first train run from New York to Mahopac was on July 4, 1871. It was an occasion for a big celebration. The Harlem Railroad then made plans to extend its tracks to Mahopac.
Now people could make the trip much more quickly and comfortable. Sometimes, very wealthy people hired a whole railroad car to bring up their family and the things they would need for the summer.
Local residents tell about a wedding that was held in a large house which stood where the Grand Union is now. The wedding guests had come up on the train. It stopped in front of the house and a long red carpet was unrolled from the tracks to the house. The guests got off and walked on the carpet to the wedding.
Source: The Mahopac Story
http://www.mahopaclibrary.org/localhistory/chapter5.htm
— Submitted September 22, 2009.
Credits. This page was last revised on June 16, 2016. It was originally submitted on September 20, 2009, by Michael Herrick of Southbury, Connecticut. This page has been viewed 955 times since then and 62 times this year. Photos:   1, 2. submitted on September 20, 2009, by Michael Herrick of Southbury, Connecticut. • Syd Whittle was the editor who published this page.
Share this page.