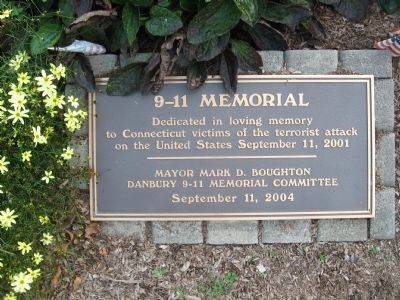 Dedicated in loving memory to Connecticut victims of the terrorist attack on the United States September 11, 2001

Topics. This historical marker and memorial is listed in this topic list: 9/11 Attacks. A significant historical date for this entry is September 11, 1860.

Location. 41° 23.415′ N, 73° 26.877′ W. Marker is in Danbury, Connecticut, in Fairfield County. Marker is at the intersection of Main Street and Wooster Street, on the left when traveling south on Main Street. Located at the south end of Elmwood Park. Touch for map. Marker is in this post office area: Danbury CT 06810, United States of America. Touch for directions. 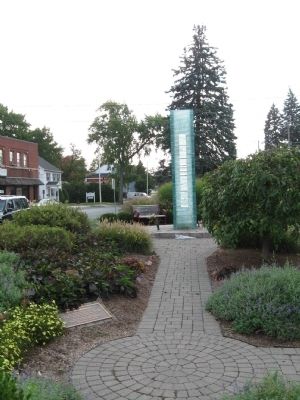 Photographed By Michael Herrick, September 24, 2009
2. The Marker and the Glass Block Column

Click or scan to see
this page online
a direct line); Schools and Education (about 300 feet away); Elmwood Park (about 600 feet away); Industrial Strength Danbury (about 700 feet away). Touch for a list and map of all markers in Danbury.