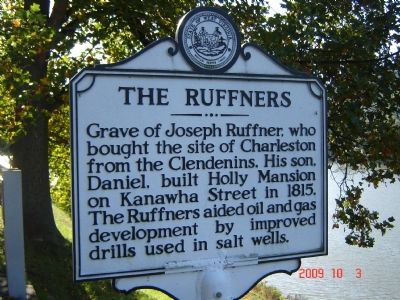 By Michael Sean Nix, October 3, 2009
1. The Ruffners Marker
Inscription.
The Ruffners. . Grave of Joseph Ruffner, who bought the site of Charleston from the Clendenins. His son, Daniel, built Holly Mansion on Kanawha Street in 1815. The Ruffners aided oil and gas development by improved drills used in salt wells. . This historical marker was erected in 1964 by West Virginia Historic Commission. It is in Charleston in Kanawha County West Virginia

Grave of Joseph Ruffner, who bought the site of Charleston from the Clendenins. His son, Daniel, built Holly Mansion on Kanawha Street in 1815. The Ruffners aided oil and gas development by improved drills used in salt wells.

Topics and series. This historical marker is listed in these topic lists: Cemeteries & Burial Sites • Industry & Commerce. In addition, it is included in the West Virginia Archives and History series list. A significant historical year for this entry is 1815.

Location. 38° 20.262′ N, 81° 37.224′ W. Marker is in Charleston, West Virginia, in Kanawha County. Marker is on Kanawha Boulevard, 0.1 miles west of Elizabeth Street, on the right when traveling east. Touch for map. Marker is in this post office area: Charleston WV 25311, United States of America. Touch for directions.

Other nearby markers. At least 8 other markers are within walking distance of this marker. Kanawha Riflemen (a few steps from this marker); Slavery in West Virginia (about 500 feet away, measured in a direct line); 45th US Colored Infantry (approx. 0.2 miles away); The 35th Star (approx. ¼ mile away); 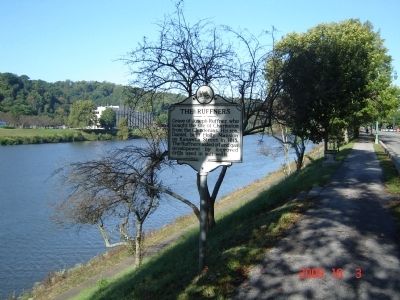 More about this marker. Marker is across the street from a park that contains the graves. 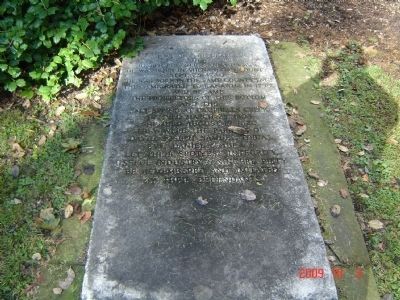 By Michael Sean Nix, October 3, 2009
3. Ruffners Grave
Here are the graves of Joseph Ruffner & Anna his wife. He was born in Shenandoah County Sept. 25, 1740. She was born in the same county 1742. They emigrated to Kanawha in 1795 and became the proprietors of this bottom and the salt spring at Campbells Creek. He died March 23, 1803. She died August 19, 1820. They were the parents of David, Joseph, Samuel, Tobias, Eve, Daniel & Abra B. Let their spotless integrity, useful industry & sincere piety be remembered and imitated by their descendants. 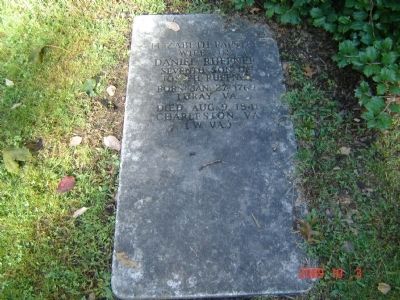 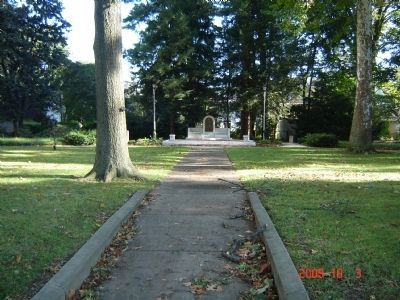 By Michael Sean Nix, October 3, 2009
5. Ruffner Memorial Park
Park the graves are in. 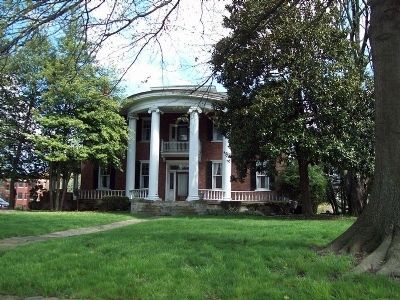