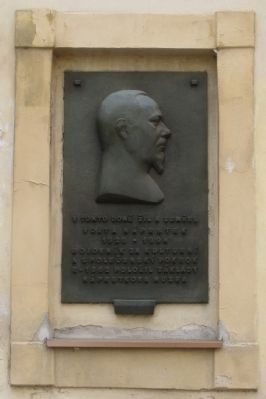 Translated, the marker reads: In this house lived and died Vojta Náprstek (1826-1894). A champion of cultural and social progress. In the year 1862 he laid the foundations for the Náprstokova Museum.

Topics. This historical marker is listed in these topic lists: Anthropology & Archaeology • Education. A significant historical year for this entry is 1862. 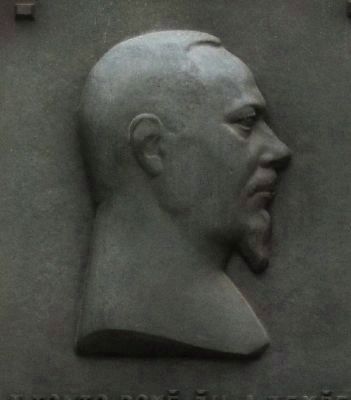 More about this marker. The marker is mounted within a frame on the front outer wall of the Náprstkova Museum, just to the left of the entryway arch. The museum is located on the west side of Betlémské Náměstí Bethlehem Square, just to the west of the Bethlehem Chapel.

Also see . . .
1. Czech Pioneers in Wisconsin. Miloslav Rechcigl, Jrs.' history of the Czech settlement of Wisconsin, "... On June 16, 1850 arrived in Milwaukee Vojta Naprstek (1826-1894) who sparked the national life among Czech Americans, not only in Wisconsin but in the entire country. He published his famous Milwaukee Flugblatter there and gave impetus for publishing Czech newspapers in the US. He was preceded here in September 1949 by a Czech musician Jan Balatka (1827-1899) who established the famed 'Milwaukee Musikverein' in Milwaukee. They both were political refugees who sought refuge in America, following the unsuccessful revolution of 1848." (Submitted on October 7, 2009.)

2. Vojta Náprstek. Wikipedia.org's English language article on Vojta Náprstek, noting, "...was a famous Czech philanthropist, patriot and politician. He was an alderman of the town of Prague (1873-1894) and town council (1881-1892). Náprstek was 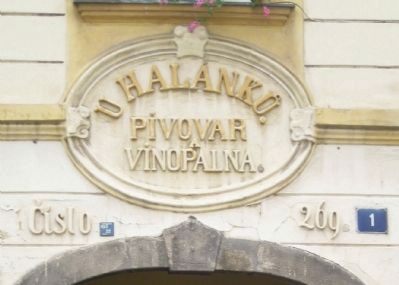 By Andrew Ruppenstein, August 22, 2009
3. "At the Halenku" brewery and distillery sign above the archway.
Náprstek's father was the proprietor of a brewery and distillery, as indicated by the sign above archway of his home.
an advocate of progressive ideas, including general living conditions in Prague, as well as the provision of education and health care facilities and the introduction of modern technologies in public life (gas lighting and cooking, the telephone, etc). He was also the founder of the Náprstek Museum." (Submitted on October 7, 2009.) 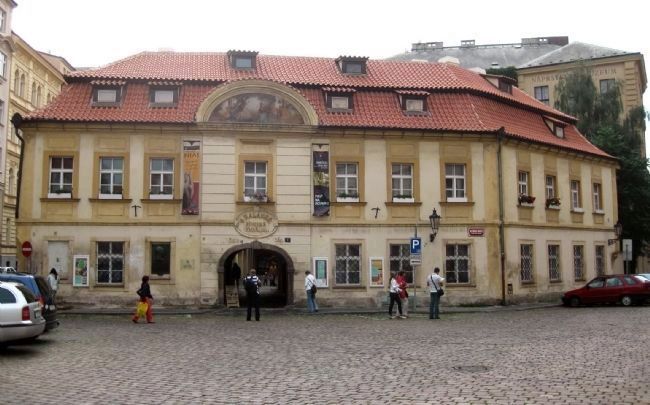 By Andrew Ruppenstein, August 22, 2009
4. View of the Náprstekova Museum (marker visible to the left of the archway).
Náprstek originally became interested in the ethnography of non-European cultures during his stay in Wisconsin, which had brought him into contact with the Dakota tribe. Upon his return to Prague the material that he had assembled became the core of the cultural anthropology museum that bears his name.
Credits. This page was last revised on February 6, 2020. It was originally submitted on October 7, 2009, by Andrew Ruppenstein of Sacramento, California. This page has been viewed 1,428 times since then and 2 times this year. Photos:   1, 2, 3, 4. submitted on October 7, 2009, by Andrew Ruppenstein of Sacramento, California. • Syd Whittle was the editor who published this page.
Share this page.