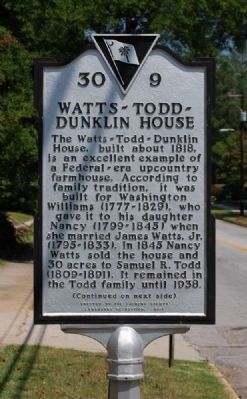 By Brian Scott, September 5, 2009
1. Watts-Todd-Dunklin House Marker - Front
Inscription.
Watts-Todd-Dunklin House. . . [Front]: . The Watts-Todd-Dunklin House, built about 1818, is an excellent example of a Federal-era upcountry farmhouse. According to family tradition, it was built for Washington Williams (1777-1829), who gave it to his daughter Nancy (1799-1845) when she married James Watts, Jr. (1795-1833). In 1845 Nancy Watts sold the house and 30 acres to Samuel R. Todd (1809-1891). It remained in the Todd family until 1938. . [Reverse]:
The Todd family owned this house from 1845 to 1938. It then passed through a succession of owners until 1950, when James Gray Dunklin (1911-1973), an antiques collector and historic preservationist, acquired it. Dunklin, who restored the house, donated it to the Laurens County Landmarks Foundation as a house museum upon his death in 1973. It was listed in the National Register of Historic Places in 1974. . This historical marker was erected in 2001 by Laurens County Landmark Foundation. It is in Laurens in Laurens County South Carolina

[Reverse]:
The Todd family owned this house from 1845 to 1938. It then passed through a succession of owners until 1950, when James Gray Dunklin (1911-1973), an antiques collector and historic preservationist, acquired it. Dunklin, who restored the house, donated it to the Laurens County Landmarks Foundation as a house museum upon his death in 1973. It was listed in the National Register of Historic Places in 1974.

Topics. This historical marker is listed in these topic lists: Agriculture • Architecture. A significant historical year for this entry is 1818. 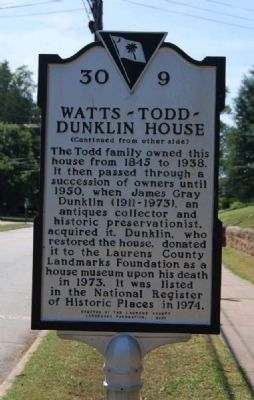 Also see . . .  James Dunklin House. Constructed ca. 1812 by Washington Williams for his daughter and her husband, the Dunklin House is one of the oldest homes in Laurens. (Submitted on October 11, 2009, by Brian Scott of Anderson, South Carolina.) 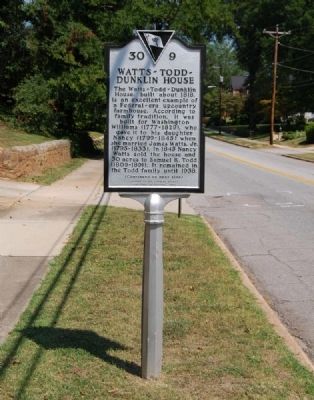 By Brian Scott, September 5, 2009
3. Watts-Todd-Dunklin House Marker - Front
Exterior
The James Dunklin house, built c. 1812, is a South Carolina upcountry farmhouse. This structure is characterized by a heart-pine exterior painted white, symmetrically arranged bays, and a shed-roofed porch extending the width of the house. The two-story frame house, set on a raised brick basement, has a first story facade of shiplap under the front porch, differing from the clapboard covering of the rest of the house. Six square fluted columns, informally spaced, support the porch roof. Glass panes of the well proportioned, 9/9 double-sash windows are original. Two of the four exterior chimneys are of the pipe-stem variety, an unusual feature in South Carolina architecture.

The rear facade has been altered. An 1845 wing was removed in 1950 and converted into a six-room apartment building located behind the main house. At this time a first-floor sun porch was added to the rear of the structure.

Interior
The house's interior, typical of the upcountry farmhouse, has been altered to fit the needs of its twentieth century owner. The basic floor plan two rooms on either side of a central hall, remains unchanged. Two front rooms have paneled wainscoting and original mantels supported by fluted pilasters. Paneled overmantels extend to the eleven-foot-high ceiling.

West rear room has been converted into a kitchen. The twelve-foot-wide 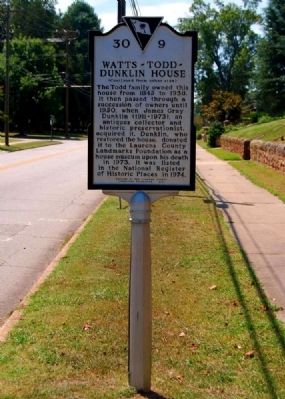 On the second floor are two large bedrooms with mantel identical to those on the first floor. A bathroom was added, and a rear bedroom reduced in size in 1950 when the rear wing was removed. Furnishings reflect both the twentieth century occupancy and the former owner1s avocation, collecting American antiques.

Surroundings
The house is located in the center of Laurens on West Main Street, a scenic stretch of nineteenth century homes, dotted with oaks, dogwoods, azaleas and magnolias. The settling basins of the city waterworks adjoin the 400 foot long lot at the rear. Four small buildings behind the house are used as apartments. In addition to the rear wing of the main house, these include a renovated slave cabin, a garage apartment, and a reconstruction of a kitchen at Colonial Williamsburg.

Significance
Constructed ca. 1812 by Washington Williams for his daughter and her husbands the Dunklin House is one of the oldest in Laurens.

In 1843 Samuel Todd, a physician, bought the two-story frame house. Reflecting the respectability and local prominence of its owners, the house is a well-built upcountry farmhouse. The heart-pine shiplap and clap-board exterior, the wide porch, and the symmetrical arrangement of windows and door are typical of the 19th Century vernacular 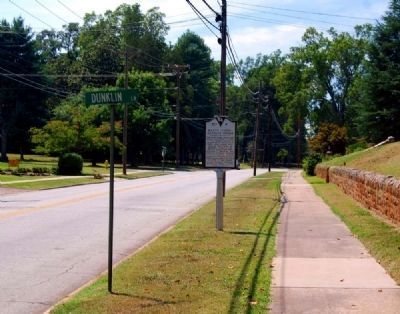 Interior features also reflect the craftsmanship of the 19th Century builder and the careful restoration of the 20th century owner. Mantels and over-mantel paneling are of unusually fine quality for an upcountry farmhouse in South Carolina. Furnished with an outstanding collection of southern antiques the house has been deeded to Laurens County for use as a house museum. (Source: National Register nomination form.)
— Submitted October 11, 2009, by Brian Scott of Anderson, South Carolina. 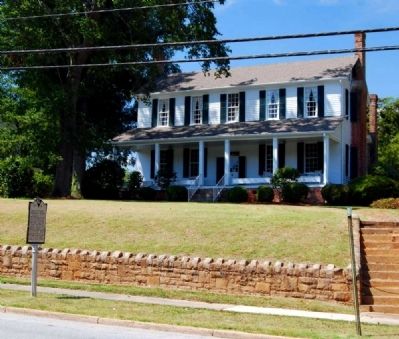 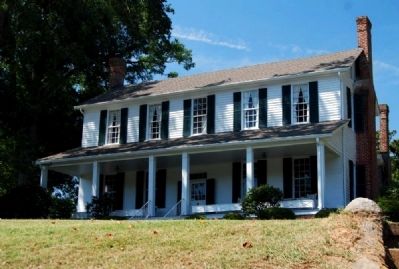