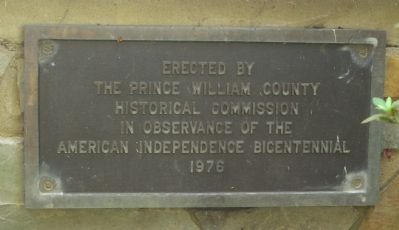 Topics. This historical marker memorial is listed in these topic lists: Arts, Letters, Music • Patriots & Patriotism • War, US Revolutionary. A significant historical year for this entry is 1776.

Location. 38° 34.115′ N, 77° 19.781′ W. Marker is in Dumfries, Virginia, in Prince William County. Marker is on Cameron Street, on the right when traveling west. The William Grayson Memorial Bandstand is located in Merchant Park, within the City of Dumfries. From I-95, follow the signs to the Weems-Botts Museum. Touch for map. Marker is in this post office area: Dumfries VA 22026, United States of America. Touch for directions.

More about this memorial. There are five markers around this bandstand, including the dedication plaque. The remaining four mark significant positions William Grayson held, and the years he held them.

Regarding William Grayson Bandstand Memorial. The following biography is from the Historic Dumfries Virginia website (http://www.geocities.com/hdvinc/williamsgrayson.htm):

William Grayson was born in Prince William County in 1736. His parents were Benjamin Grayson, a merchant of the area, and Susanna Monroe Grayson, aunt of James Monroe (fifth president of the United States). He attended the College of Philadelphia, now the University of Pennsylvania, which he left in 1760 to continue his education at Oxford. After graduation from that institution, he studied law at the Temple in London.

Returning to Dumfries about 1765, he set up a successful law practice. He became a property owner in Dumfries, where he established his home and maintained a small farm. He became a land speculator as well. 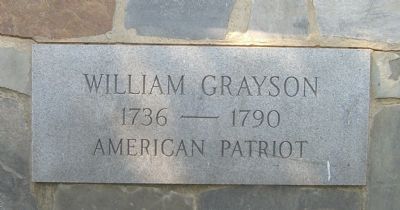 By Kevin White, September 6, 2007
3. A Marker on the William Grayson Bandstand Memorial
William Grayson - 1736 - 1790 - American Patriot
He had four sons by his marriage to Eleanor Smallwood from Maryland (Frederick, George, Robert, and Alfred) and one daughter, Hebe.

Stirred by patriotic fervor, Grayson became involved in revolutionary activity by serving as Captain of the Prince William Independent Company of Cadets and on the Prince William County Committee of Safety. During the Revolutionary War, he served as assistant secretary and aide-to-camp to General Washington, advancing to the rank of Colonel.

He fought at the battles of Monmouth, White Plains, Brandywine, and Germantown. The battle of Monmouth is significant. Grayson was called upon to testify, at the court martial of Major General Charles Lee, about the confusion during that battle.

After Grayson’s resignation, from the army in 1779, he was appointed to serve on the Board of War and held this position until 1781. He served as a member of the Virginia House of Delegates from 1784 to 1785, and was elected to represent the Commonwealth in Congress where he served until 1787. In 1788, he was one of two representatives from Prince William County to the constitutional convention in Richmond.

Here he was among those who fought actively against ratification because of the fear of a central government operating without proper restraint. The promise to incorporate a Bill of Rights by amendment is testimony to the success of

By Kevin White, September 6, 2007
4. A Marker on the William Grayson Bandstand Memorial
1774 - Captain - Prince William Independent Company of Cadets
1776 - Aide de Camp to Gen. George Washington
Grayson, George Mason, and other Virginians in ensuring the fundamental protection afforded by the first Ten Amendments to the Constitution of the United States.

George Washington, destined to become the nation's first president under the Constitution, prevailed upon his long-time friend, Colonel Grayson, to help heal the wounds of the struggle to secure ratification by running for election to the First Congress. He was elected as one of Virginia’s first senators, along with Richard Henry Lee, on November 8, 1788. He served in this capacity until his death on March 12, 1790. His remains were buried in the family vault at the home of his brother, the Reverend Spence Grayson, near Woodbridge.