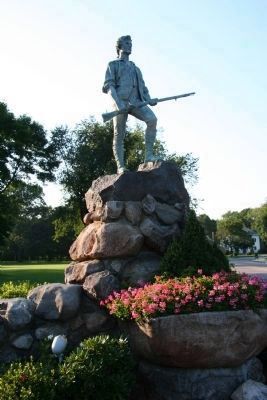 Marker contains no text other than identifying the sculpture's benefactor:

The bequest of Francis Brown Hayes to the town of Lexington 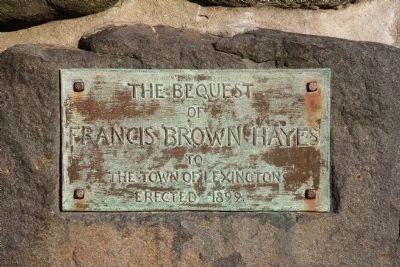 Regarding Lexington Minuteman. The minuteman is portrayed as a colonial farmer holding a musket in front of him with both hands. He stands on a granite boulder with his proper left leg resting on a rocky ledge. Beneath the granite boulder is a pile of rocks and a semicircular basin originally a watering trough for horses, but now functions as a planter. A drinking fountain was also part of the original plan.

The sculpture was given to the Town of Lexington through the bequest of Francis Brown Hayes. It was sculpted by Henry Hudson Kitson (1863-1947) and dedicated April 19, 1900.

Also see . . .  Wikipedia entry for Minutemen. Minutemen were individual colonists who independently organized to form militia companies self-trained in weaponry, tactics and military strategies from the American colonial partisan militia during the American Revolutionary War. They provided a highly mobile, rapidly deployed force that allowed the colonies to respond immediately to war threats, hence the name. 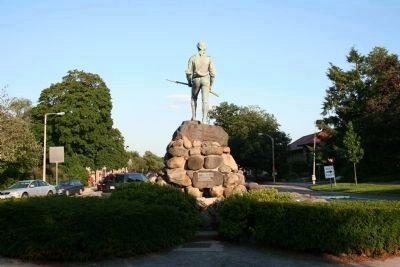 Photographed By Dale K. Benington, August 1, 2009
3. Lexington Minuteman Marker
View, looking east. The minuteman monument is located at the southeastern corner of the Lexington Village Green. The Lexington Green is a Registered National Historic Landmark.
The minutemen were among the first to fight in the American Revolution. Their teams constituted about a quarter of the entire militia. Generally younger and more mobile, they served as part of a network for early response. Minuteman and Sons of Liberty member Paul Revere were among those who spread the news that the British Regulars (soldiers) were coming out from Boston. (Submitted on April 11, 2015.) 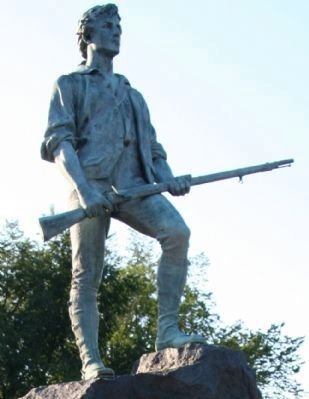