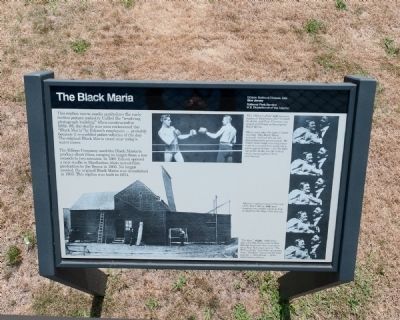 The Edison Company used the Black Maria to produce short films, ranging in length from a few seconds to two minutes. In 1901, Edison opened a new studio in Manhattan, then moved film production to the Bronx in 1905. No longer needed, the original Black Maria was demolished in 1903. This replica was built in 1954. . This historical marker was erected by National Park Service, U.S. Department of the Interior. It is in West Orange in Essex County New Jersey

This replica movie studio symbolizes the early motion picture industry. Called the “revolving photograph building” when constructed in 1892-93, the studio was soon nicknamed the “Black Maria” by Edison’s employees - probably because it resembled police vehicles of the day. The original Black Maria stood near today’s water tower.

The Edison Company used the Black Maria to produce short films, ranging in length from a few seconds to two minutes. In 1901, Edison opened a new studio in Manhattan, then moved film production to the Bronx in 1905. No longer needed, the original Black Maria was demolished in 1903. This replica was built in 1954.

Topics. This historical marker is listed in these topic lists: Arts, Letters, Music • Entertainment • Industry & Commerce. A significant historical year for this entry is 1901. 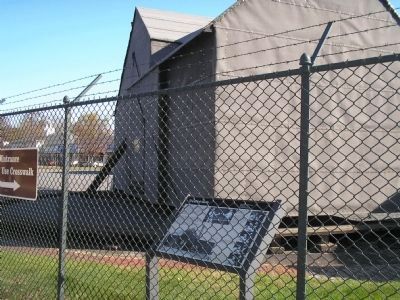 Click or scan to see
this page online
traveling north. Touch for map. Marker is in this post office area: West Orange NJ 07052, United States of America. Touch for directions.

More about this marker. A picture of the Black Maria appears along the bottom of the marker, with a caption of “Edison’s employees opened the roof of the Black Maria and rotated it on wooden tracks to keep sunlight on the stage while filming.” Elsewhere on the marker are scenes from two films made by Edison. The set of pictures along the right side of the marker are from a film called “The Kiss (1896)” and includes the caption “John Rice and May Irwin came to West Orange to recreate this scene from their New York success, ‘The Widow Jones.’ Less than one minute long, The Kiss was one of the most popular – and daring – of the early motion pictures.” Another picture of boxers has a caption of “This 1894 prizefight between James J. ‘Gentleman Jim’ Corbett, in shorts, and Peter Courtney was staged and filmed in the original Black Maria.

Many years after the fight, Corbett recalled, ‘The Black Maria certainly did look like an old-fashioned police patrol wagon. We hadn’t been inside very long before most of us would have preferred a police patrol at that – for the little moveable studio was the hottest, most crowded place I have ever known.’”

Related markers. Click here for a list of markers that are related to this marker. Take a tour of the markers found at the Laboratory Complex of Thomas Edison National Historical Park.

3. 1894 prizefight between Corbett and Courtney. 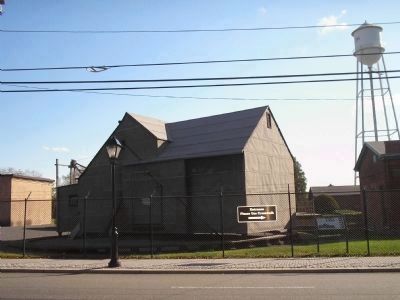 By Bill Coughlin, November 6, 2009
3. The Black Maria
The slanted roof of the Black Maria, on the left in the photo, could be opened to let sunlight into the studio. The wooden tracks on which the structure was rotated are visible at the base of the building. The original Black Maria was located on the site of the water tower on the right.
Round 1 of James "Gentlemen Jim" Corbett's boxing match with Peter Courtney filmed at Thomas Edison's Black Maria studio. (Submitted on July 1, 2013, by Bill Coughlin of Woodland Park, New Jersey.) 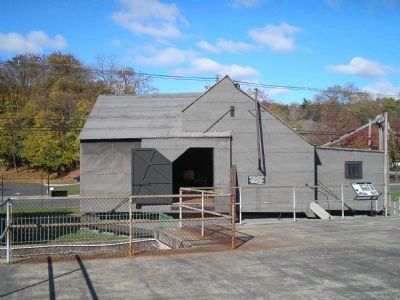 By Bill Coughlin, November 6, 2009
4. The Black Maria
This photo was taken from inside the Thomas Edison National Historical Park. The back of the marker can be seen to the left of the Black Maria. 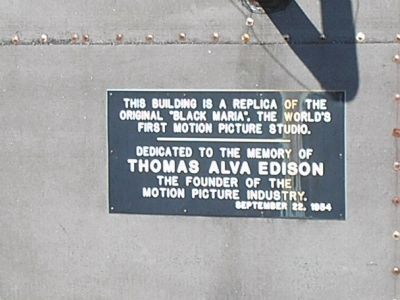