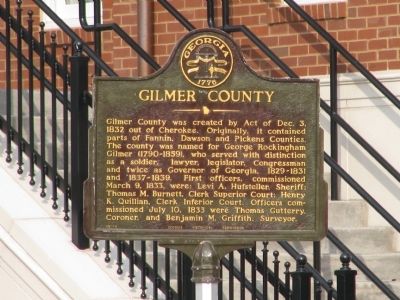 Topics and series. This historical marker is listed in these topic lists: Government & Politics • Settlements & Settlers. In addition, it is included in the Georgia Historical Society series list. A significant historical date for this entry is March 9, 1825. 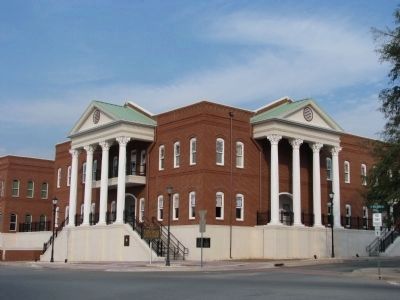 Click or scan to see
this page online
and Broad Street, on the right when traveling north on North Dalton Street. Touch for map. Marker is in this post office area: Ellijay GA 30540, United States of America. Touch for directions.

More about this marker. This marker is at the location of the original Gilmer County Courthouse. The Dec. 1832 act creating Gilmer County provided that "the place where Ned Tucker recently lived" would serve as the county's initial courthouse and place for holding elections. In 1854, a new courthouse was built, which would serve the county for the next 80 years. The historic courthouse was left standing until January 2008, when it was demolished. In recognition of the memory of the old courthouse, a new county government building of similar appearance was built in its place. The new building is connected to the courthouse complex, but from the city square it almost appears to be a restoration of the old courthouse. 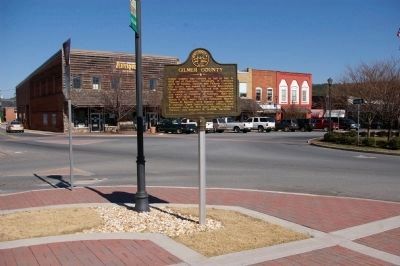 Photographed By David Seibert, February 26, 2011
3. Gilmer County Marker
Looking from the front of the courthouse at the marker and the new roundabout, which replaced the old courthouse square. 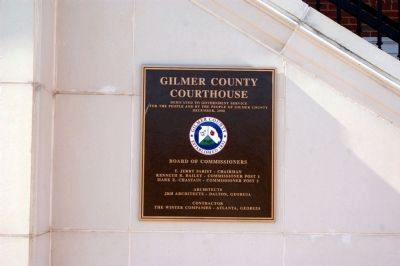