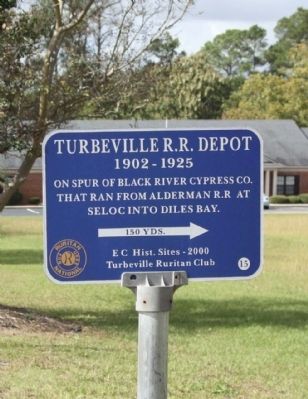 Topics. This historical marker is listed in this topic list: Railroads & Streetcars. A significant historical year for this entry is 2000. 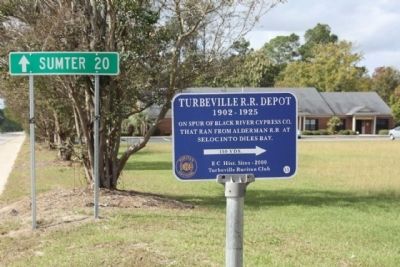 Click or scan to see
this page online
(approx. 0.4 miles away); Miller H. Mellette Highway (approx. one mile away); " Ebenezer " (approx. 7.6 miles away). Touch for a list and map of all markers in Turbeville.

Additional commentary.
1. Historic Error
The railroad was built by D W Alderman who branched a logging line north past Turbeville on the west to reach Dials Bay and later Woods Bay.
The Alderman & Sons Railroad was built to Coles Crossroads in 1895. The Dials Bay branch was built at this time. Alderman changed the Alcolu to Coles Crossroads line to become the Alcolu Railroad in 1902. The logging line to Dials Bay was NOT part of the Alcolu.
In 1904 Alderman was very active in Dials Bay very near Shiloh in Sumter County. A laborer attacked Forrest Collins in June of 1904, and Collins shot him to stop him. The laborer died the next day.

Black River Cypress Company built a mill at Gable in 1914 on the east bank of the Black River. In 1916, Alderman agreed to have BRCL use the branch liner and run their own trains in to harvest cypress trees in "Dyals Bay"

It is WRONG to indicate that BRCL built the branch when it was built 21 years earlier by Alderman. 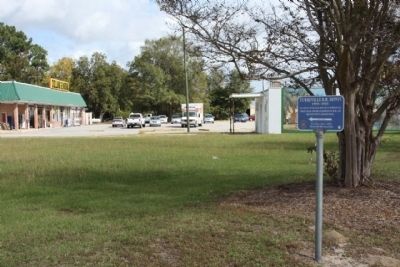 By Mike Stroud, October 23, 2009
3. Turbeville R.R. Depot Marker
of this railroad is clouded with guesses and errors, so I am sure this story seemed logical at the time. 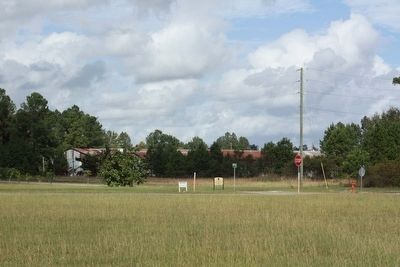