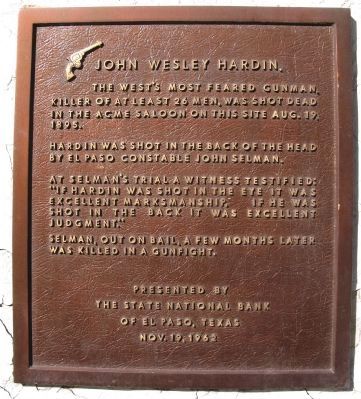 Photographed By Richard Denney, December 26, 2007
1. John Wesley Hardin Marker
Inscription.
John Wesley Hardin. . The west's most feared gunman, killer of at least 26 men, was shot dead in the Acme Saloon on this site Aug. 19, 1895., Hardin was shot in the back of the head by El Paso constable John Selman., At Selman's trial witnesses testified: "If Hardin was shot in the eye it was excellent marksmanship, if he was shot in the back it was excellent Judgment.", Selman, out on bail, a few months later was killed in a gunfight. . This historical marker was erected in 1962 by State National Bank of El Paso, TX. It is in El Paso in El Paso County Texas

Hardin was shot in the back of the head by El Paso constable John Selman.

Selman, out on bail, a few months later was killed in a gunfight.

Topics. This historical marker is listed in these topic lists: Industry & Commerce • Law Enforcement. A significant historical month for this entry is August 1800. 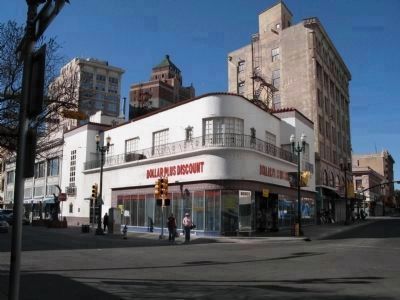 Photographed By Richard Denney, December 26, 2007
2. Site of Acme Saloon, El Paso, TX
Marker is on wall, visible to left and below the "one-way" sign, lower left part of picture.

Related marker. Click here for another marker that is related to this marker. This is where he was captured in 1877.

Also see . . .  John Wesley Hardin, Wikipedia article. “In January 1871, Hardin was arrested for the murder of Waco, Texas city marshal Laban John Hoffman, which he denied having committed. Following his arrest, he was held temporarily in a log jail in the town of Marshall, awaiting transfer to Waco for trial. While locked up, he bought a revolver from another prisoner. Two Texas State Policemen, Captain Edward T. Stakes and an officer named Jim Smalley, were assigned to escort Hardin to Waco for trial. According to Hardin, they tied him on a horse with no saddle for the trip. While making 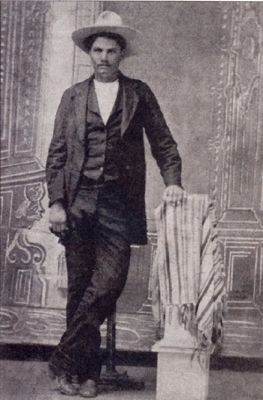 Via Wikimedia Commons
3. This ferrotype photograph is a mirror image of John Wesley Hardin.
Occupation: card sharp, school teacher, cowboy, cattle rustler, lawyer.
camp along the way, Hardin escaped when Stakes went to procure fodder for the horses. He claims he was left alone with Smalley, who began to taunt and beat the then-17-year-old prisoner with the butt of a pistol. Hardin says he feigned crying and huddled against his pony’s flank. Hidden by the animal, he pulled out a gun, fatally shot Smalley, and used his horse to escape.” (Submitted on November 22, 2009, by Richard Denney of Austin, Texas.) 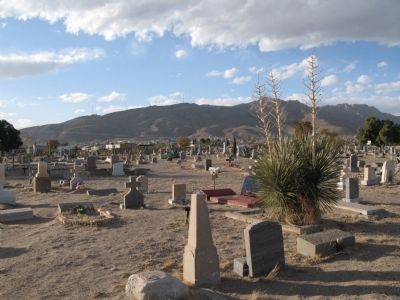 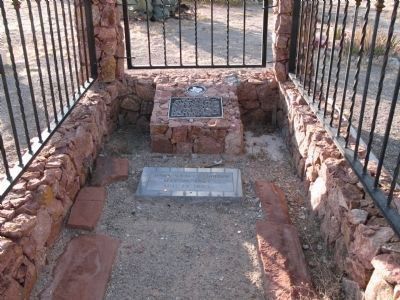 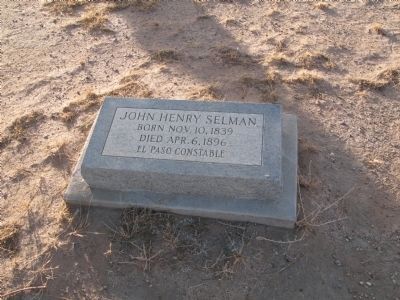