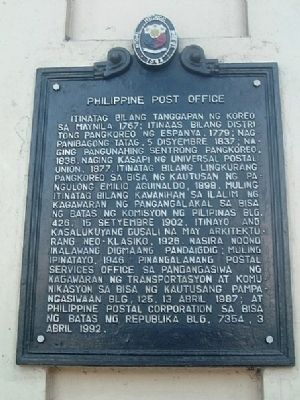 Rough English translation:
Established as a post office in Manila in 1767; elevated to a postal district of Spain, 1779; modernized, 5 December 1837; became a postal center, 1838, became a member of the Universal Postal Union, 1877. Established as 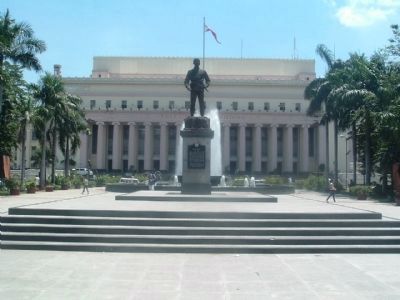 Click or scan to see
this page online
a postal service by virtue of law by President Emilio Aguinaldo, 1898. Re-established as a bureau under the Department of Risk by virtue of Commission of the Philippines law No. 426, 15 September 1902. Construction of the current building, with Neo-Classical architecture, 1926. Damaged during World War II; re-built, 1946. Named Postal Services Office under the management of the Department of Transportation and Communications to the effectiveness of executive Order No. 125, April 13, 1987, and Philippine Postal Corporation by virtue of Republic Act No. 7354, April 3, 1992.

Topics and series. This historical marker is listed in this topic list: Charity & Public Work. In addition, it is included in the Postal Mail and Philately 📭 series list. A significant historical date for this entry is April 12, 1897.

Other nearby markers. At least 8 other markers are within walking distance of this marker. Andres Bonifacio (about 90 meters away, measured in a direct line); In Memory of the Victims of Military Sexual Slavery during the Second World War (about 120 meters away); Manila Metropolitan Theater (about 180 meters away); Mother Francisca del Espiritu Santo 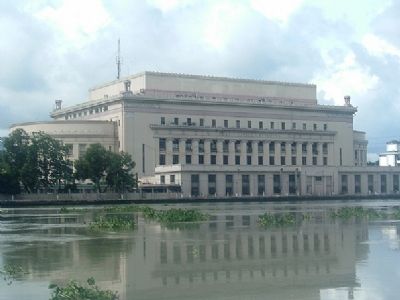