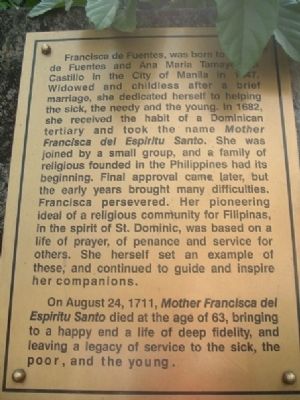 Francisca de Fuentes, was born to Don Simon de Fuentes and Ana Maria Tamayo del Castillo in the City of Manila in 1647. Widowed and childless herself after a brief marriage, she dedicated herself to helping the sick, the needy and the young. In 1682, she received the habit of a Dominican tertiary and took the name Mother Francisca del Espiritu Santo. She was joined by a small group, and a family of religious founded in the Philippines had its beginning. Final approval came later, but the early years brought many difficulties. Francisca persevered. Her pioneering ideal of a religious community for Filipinas, in the spirit of St. Dominic, was based on a life of prayer, of penance and service for others. She herself set an example of these; and continued to guide and inspire her companions.

On August 24,1711, Mother Francisca del Espiritu Santo died at the age of 63, bringing to a happy end a life of deep fidelity, and leaving a legacy of service to the sick, the poor, and the young.

Topics. This historical marker is listed in these topic lists: Churches & Religion • Women. A significant historical year for this entry is 1647. 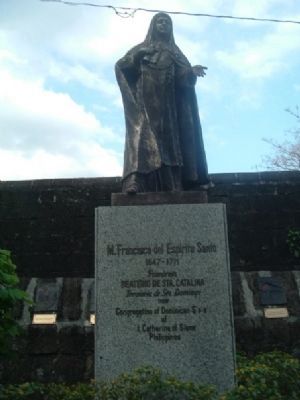 Other nearby markers. At least 8 other markers are within walking distance of this marker. College of San Juan de Letran (a few steps from this marker); Beaterio-Colegio de Santa Catalina (about 120 meters away, measured in a direct line); In Memory of the Victims of Military Sexual Slavery during the Second World War (about 150 meters away); Hospital de San Juan de Dios (about 210 meters away); Andres Bonifacio (about 240 meters away); Cruceiro (about 240 meters away); Philippine Post Office (approx. 0.3 kilometers away); Plaza de España (approx. 0.3 kilometers away). Touch for a list and map of all markers in Intramuros.
Credits. This page was last revised on October 23, 2019. It was originally submitted on December 8, 2009, by I.G.V.Atajar of San Jose, California. This page has been viewed 3,191 times since then and 6 times this year. Photos:   1, 2. submitted on December 8, 2009, by I.G.V.Atajar of San Jose, California. • Syd Whittle was the editor who published this page.

Editor’s want-list for this marker. Wide area photo of the marker and its surroundings. • Can you help?
Share this page.