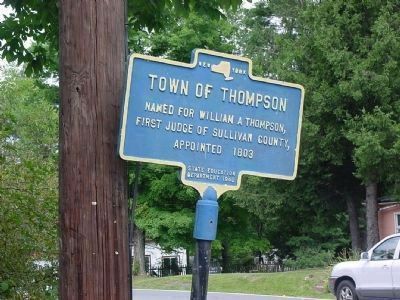 Regarding Town of Thompson. Judge Thompson, a native of Woodbury, 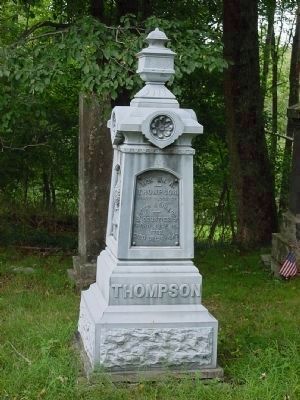 By Tom Rue, August 18, 2005
2. Grave of Judge William A. Thompson
"Hon. Wm. A. Thompson, first Judge of Ulster & Sullivan Counties, born June 15, 1762, died Dec. 9, 1847", located in Thompson family cemetery about 500 yards from the Town of Thompson Marker (above).
Connecticut, was the oldest of eight children fathered by Hezekiah Thompson, a lawyer. William Thompson became a licensed attorney in 1784 and, after operating successful practices in Norwalk and Horseneck, Connecticut, as well as New York City, he came - with his second wife and three children to the area which would be come Sullivan County in 1794.

He built the township's first permanent settlement which he called Albion Mills (later known as Thompsonville), with a small log house for himself and his family, and later a sawmill and a grist mill on the Sheldrake Creek which was completed in the summer of 1796.

In 1802 Judge Thompson was appointed by Governor George Clinton one of the judges of the common pleas of Ulster County, and became that county's First Judge a year later. When Sullivan county was erected in 1809 he was its chief magistrate. He remained so until 1823 when he became ineligible by reason of his age. In his later career he became an authority on fossils and was a member of many learned societies. He lived to the age of 85, fathering 16 children and outliving three wives.