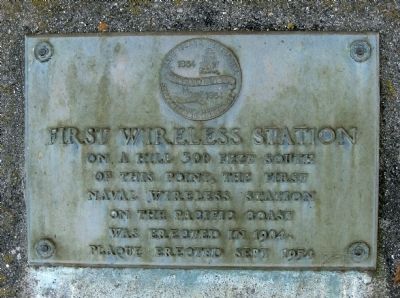 On a hill 300 feet south of this point, the first naval wireless station on the Pacific Coast was erected in 1904.

Topics. This historical marker is listed in these topic lists: Communications • Military. A significant historical month for this entry is September 1954.

More about this marker. The marker is mounted on a monument on Club Drive, a few hundred feet short of the entrance to the Mare Island Golf Club, at the point where Club Drive turns east when going uphill towards the golf club. 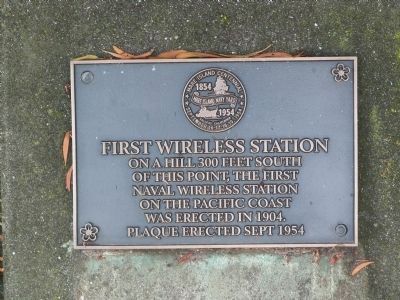 Photographed By James King, November 13, 2014
2. New First Wireless Station Marker
This marker has been replaced some time in the last five years. This is the new one.


• The location 300 feet south of the marker is now a parking lot.


• The Mare Island radio station played a key role in maintaining communications between San Francisco and the rest of the country after the earthquake and fire of April 17, 1906. "The Navy radio stations played a major role in providing this means of remaining in touch with the outside world. As soon as it was realized that this was the city's sole rapid contact with the outside, they were flooded with messages from military and municipal authorities and the general public. In about 2 weeks the Chicago sent and received over 1,000 messages. The naval radio station on Yerba Buena Island was fully occupied acting as a relay between the Chicago and the station at the Mare Island Navy Yard which provided telegraphic connection with the rest of the country." - Captain Linwood S. Howeth, USN (Retired), History of Communications-Electronics in the United States Navy 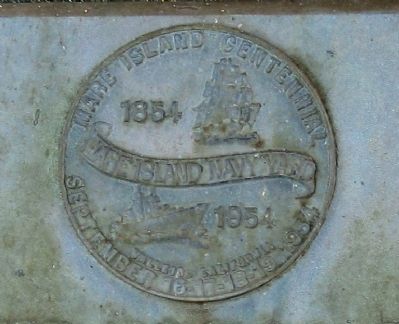 Photographed By Andrew Ruppenstein, March 29, 2009
3. First Wireless Station Marker - Closeup of Centennial Seal
The marker is located on the grounds of the Mare Island Naval Shipyard, which closed in 1996. The marker was erected in 1954 as part of the Shipyard's centennial celebrations. The picture above is a closeup of the Shipyard's centennial seal, with the top half inscribed "Mare Island Centennial", with the date 1854 below next to a naval ship of the era, and the bottom half inscibed "September 16-17-18-19 1954", directly below a depiction of a modern warship.
NAVCOMMSTA San Francisco - US Navy Radio NPG. Navy Radio entry. (Submitted on September 24, 2020, by Larry Gertner of New York, New York.) 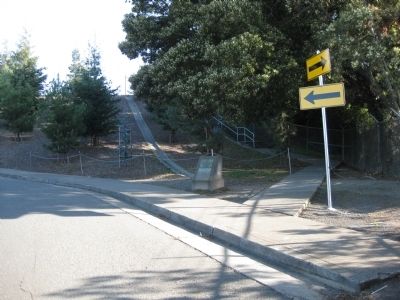