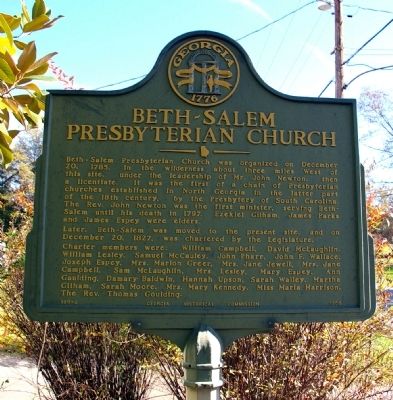 Beth-Salem Presbyterian Church was organized on December 20, 1785, in the wilderness about three miles West of this site, under the leadership of Mr. John Newton, then a licentiate. It was the first of a chain of Presbyterian churches established in North Georgia in the latter part of the 18th century, by the Presbytery of South Carolina. The Rev. John Newton was the first minister, serving Beth-Salem until his death in 1797. Ezekiel Gilham, James Parks and James Espey were elders.

Later, Beth-Salem was moved to the present site, and on December 20, 1827, was chartered by the Legislature.

Topics and series. This historical marker is 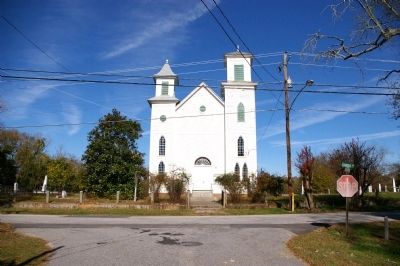 Photographed By David Seibert, November 15, 2009
2. Beth-Salem Presbyterian Church and Marker
The marker is just to the left of the church, built in 1896. This building replaced an earlier one erected in 1822.

Click or scan to see
this page online
listed in this topic list: Churches & Religion. In addition, it is included in the Georgia Historical Society series list. A significant historical month for this entry is December 1930.