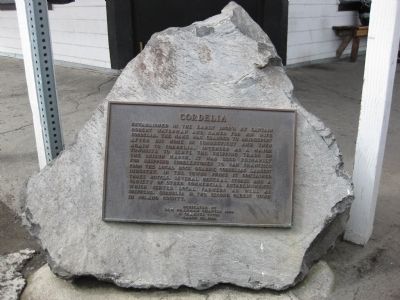 By Andrew Ruppenstein, March 15, 2009
1. Cordelia Marker
Inscription.
Cordelia. . Established in the early 1850's by Captain Robert Waterman and named for his wife, Cordelia. The name was changed to Bridgeport after his home in Connecticut and then again to Cordelia. Intended as a major townsite to serve the shipping trade on the Suisun Marsh, it was used primarily for shipping cobblestones to San Francisco from the local rock quarry, Cordelia's largest industry. In the towns prime it contained three hotels, several general stores and other commercial establishments which served local farmers as well as shippers. Cordelia is the second oldest town in Solano County. . Dedicated by . Sam Brannan Chapter 1004 . E Clampus Vitus . March 20, 1982 . This historical marker was erected in 1982 by Sam Brannan Chapter 1004 of E Clampus Vitus. It is in Cordelia in Solano County California

Established in the early 1850's by Captain Robert Waterman and named for his wife, Cordelia. The name was changed to Bridgeport after his home in Connecticut and then again to Cordelia. Intended as a major townsite to serve the shipping trade on the Suisun Marsh, it was used primarily for shipping cobblestones to San Francisco from the local rock quarry, Cordelia's largest industry. In the towns prime it contained three hotels, several general stores and other commercial establishments which served local farmers as well as shippers. Cordelia is the second oldest town in Solano County.

Topics and series. This historical marker is listed in this topic list: Settlements & Settlers. In addition, it is included in the E Clampus Vitus series list. A significant historical month for this entry is March 1835. 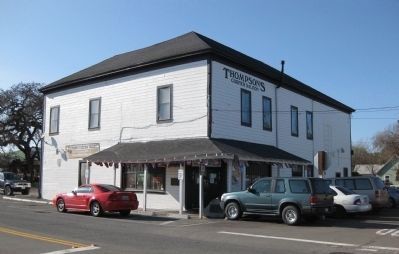 By Andrew Ruppenstein, March 8, 2009
2. Cordelia Marker - Wide View
The marker is mounted on a rock in front of the entrance to Thompson's Corner Saloon, Solano County's oldest bar.

Click or scan to see
this page online
of Cordelia Road and Ritchie Road, on the right when traveling west on Cordelia Road. Touch for map. Marker is at or near this postal address: 2147 Cordelia Road, Fairfield CA 94534, United States of America. Touch for directions.

More about this marker. The marker is mounted on a rock in front of the entrance - can't miss it.

Also see . . .
1. Two Different Towns of Cordelia. Jerry Bowen's 2001 article on the history of Cordelia, in which he examines the origins of the town, noting that the current settlement called Cordelia is not in the same location as the original, and that regardless of location, Cordelia is, contrary to the claim, not the second oldest town in Solano, with Benicia, Vallejo, and Vacaville having been platted and settled earlier. (Submitted on January 5, 2010.)

2. Captain Robert "Bully" Waterman. The Maritime Heritage Project's biography of Captain Robert Waterman, who in addition to founding Cordelia (and nearby Fairfield), was also captain of the famed Sea Witch, gaining fame for setting speed records, 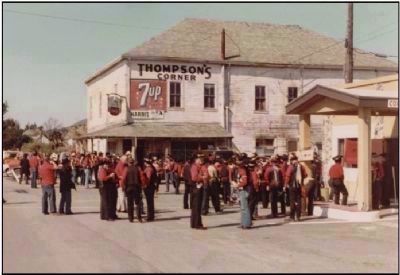 Robert Waterman, a former clipper ship captain, recognized the importance of water transport to the development of the area and decided to locate a major town site on Suisun Marsh in the early 1850’s.

Waterman’s Suisun Rancho included the solid land along the fringe of the marsh from Green Valley Creek to Laurel Creek. Along this stretch, there were three waterways through which boats could reach dry land without great difficulty—the passages now called Cordelia Channel, Suisun Creek and Suisun Slough. Waterman believed that a site at the head of Cordelia Slough would be the best place for central Solano County’s major town. The head of Cordelia Slough, unlike the head of other waterways, was close to the Sacramento-Benicia road which led to the upper Suisun and Green Valleys. Waterman felt that there was little risk in his enterprise, since he was under the impression that he held title to the other possible sites and could exclude any competitors. Waterman named his new town Cordelia, after his wife.

Unfortunately, the retired clipper captain had not explored Suisun Slough. In 1850 Curtis Wilson and John Baker became the first Americans to sail up the slough to its head of navigation. They were followed later in the year by Josiah Wing, skipper of the schooner “Anna Sophia”.

Wing, like Waterman hoped to establish a shipping point for the farm products of Central Solano County. As he reached the head of the slough, Wing found a small area which rose just five feet above the surrounding marsh. This was a small island, separated from the mainland by only one hundred yards of marsh, traversable without much difficulty. By definition of the Suisun Grant, which included all dry land up to the edge of the marsh, Wing’s island fell just beyond Waterman’s claims.

It soon became apparent that nature had played a costly trick on Waterman. Wing was able to establish a shipping point on his island in competition with the town of Cordelia, and his establishment soon outstripped Waterman’s in its importance. Wing’s new town, which became known as Suisun City, could draw upon a larger region for commercial shipping activity, since it was five miles closer than Cordelia, to the Lagoon and Vaca Valleys. As the settlement expanded eastward from Rockville in the late 1850’s, much of the Suisun Valley trade came to Suisun City. Because of this, Cordelia failed to become the commercial center that Waterman envisioned. When the railroad crisscrossed the county in the 1870’s, Cordelia was abandoned and rebuilt several hundred yards away, alongside the railroad tracks. Waterman renamed the town Bridgeport, after the town in Connecticut where he had grown up. Some time later, Bridgeport reverted to Cordelia.

Cordelia’s biggest industry was a basalt rock quarry on Nelson’s Hill. The streets of San Francisco were paved with Cordelia cobblestones. The Thomasson Quarry opened in 1875 and at its peak employed 80 men. By 1913 its workforce had declined and only three men were employed there. The wharf, used to ship hay, grain and wood was at the end of Bridgeport Avenue, where the sewer plant is today. Cordelia’s main residential Street is still named Bridgeport.

Prior to World War I it boasted five bars and four hotels. In 1913 a PG&E substation was built which was the largest indoor station in the world. The substation was an engineering show piece and provided power to San Francisco in the south, and as far north as Ukiah.

Cordelia was still a good sized town in the 1920’s. It had a hardware store, a mercantile, train depot, shoe repair shop, cheese factory, restaurant, laundry, and blacksmith shop. By 1930, Cordelia had its own automobile dealership where the present firehouse is located. Next door was the telephone exchange. At one time the population reached close to 800. Cordelia is an unusual settlement, which appears more as an aggregation of farm buildings along a railroad siding than as a small town.

Though its commercial center encompassed more than the single building which houses the saloon Thompson’s Corner, the town has always consisted in large part of farmhouses with outbuildings and fields or pasture behind. While this was the manner in which many 19th century communities began, very few have survived in this condition.

Cordelia has withstood the onslaughts of Suisun City, the railroad bypassing its original location, several fires, and the Great Depression. Of all the towns in Solano Country, only Benicia has a longer history than Cordelia.