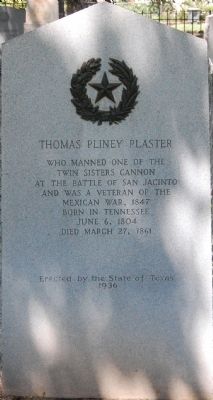 By Keith Peterson, August 26, 2007
1. Thomas Pliney Plaster Marker
Inscription.
Thomas Pliney Plaster. . . Who manned one of the Twin Sisters Cannon at the Battle of San Jacinto and was a veteran of the Mexican War, 1847. Born in Tennessee June 6, 1804. Died March 27, 1861. . This historical marker was erected in 1936 by State of Texas. It is in Austin in Travis County Texas

Topics and series. This historical marker is listed in these topic lists: Cemeteries & Burial Sites • War, Mexican-American • War, Texas Independence. In addition, it is included in the Texas 1936 Centennial Markers and Monuments series list. A significant historical month for this entry is March 1943.

Location. 30° 15.935′ N, 97° 43.638′ W. Marker is in Austin, Texas, in Travis County. Marker can be reached from Navasota Street north of East 7th Street, on the right when traveling north. The marker is in the Texas State Cemetery. Touch for map. Marker is at or near this postal address: 909 Navasota Street, Austin TX 78701, United States of America. Touch for directions. 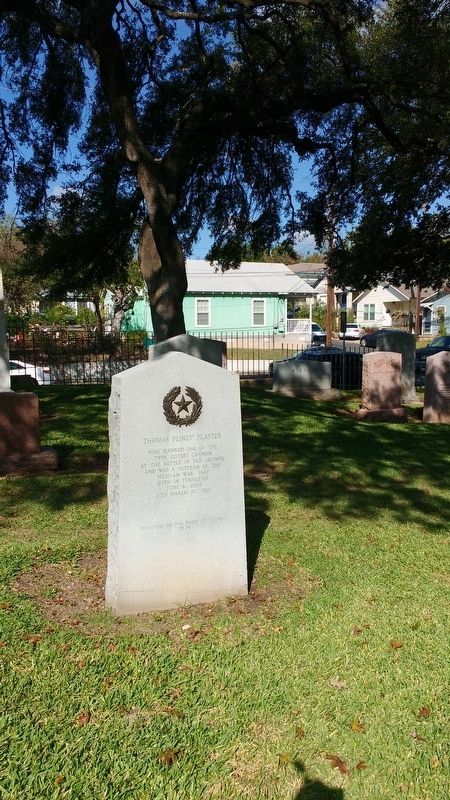