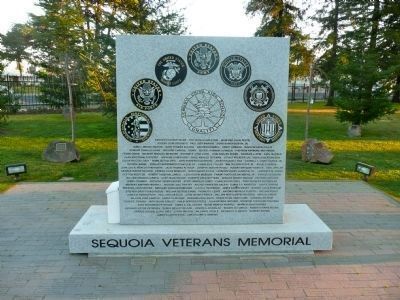 Sequoia High School students who gave their lives while serving in the United States Armed Forces: ] 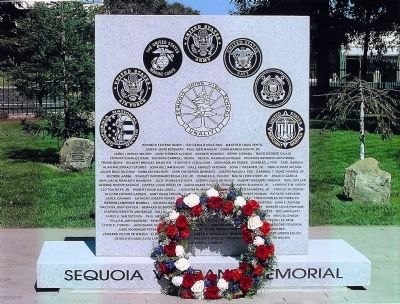 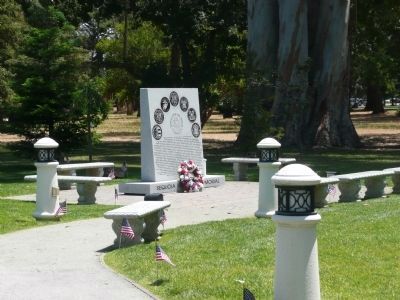 Erected 2005 by Created by Dee Rowan Eva and her husband, Richard Eva, both from the Class of 1961, and the Sequoia High School Alumni Association.

By Syd Whittle, September 17, 2005
4. Back of Memorial
Sequoia Veterans Memorial
Dedicated September 17, 2005
To the Families and Friends of
These Brave Sequoians
A Labor of Love by Dee Rowan Eva
Class of 1961
are within walking distance of this marker. Carrington Hall (within shouting distance of this marker); The Tradition of Sequoia’s Class Plaques (about 300 feet away, measured in a direct line); A. C. Argo (about 500 feet away); Redwood City Woman’s Club (about 600 feet away); Al Terremere (approx. 0.2 miles away); Redwood City Arch (approx. ¼ mile away); Soledad O. de Arguello (approx. ¼ mile away); California Square (approx. 0.4 miles away). Touch for a list and map of all markers in Redwood City.

More about this memorial. There is parking on the street as well as a small parking area inside the gate to Sequoia High School. The monument is lit at night and there is a timer switch on the light stand to the left of the path where visitors can turn on the pathway lights during their visit.

The monument was the brainchild of Dee Rowan Eva and her husband, Richard Eva, both from the Class of 1961, with the assistance of the Sequoia High School Alumni Association and the cooperation of the Sequoia Union High School District, Sequoia High School administration, teachers, staff. Donations were received from numerous Sequoia alums, the Redwood City Civic Cultural Commission and several civic and cultural groups who contributed so that the memorial could be built. Engraved bricks, engraved concrete benches and trees with bronze plaques are still being sold. For information about the monument, 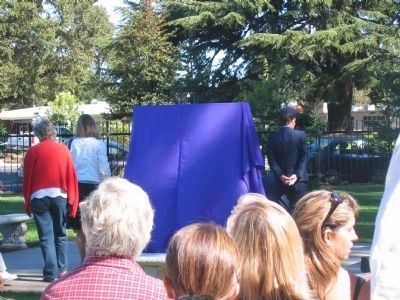 Additional commentary.
1. Flag Presentation
Major Kim Sweeting McArthur, USAF, whose father Ted Sweeting, (second name on the monument) was a pilot during the Vietnam War and was shot down. He was rescued the next day and sent to Holland to recover from his injuries. During his recovery, he and his co-pilot flew to Germany for a short trip and on the way back, 15 miles away from the air base in Holland, their plane crashed and he was killed in the accident. Major McArthur participated in the flag presentation as a tribute to her father, and the flag was presented to her in his memory.
— Submitted January 6, 2010. 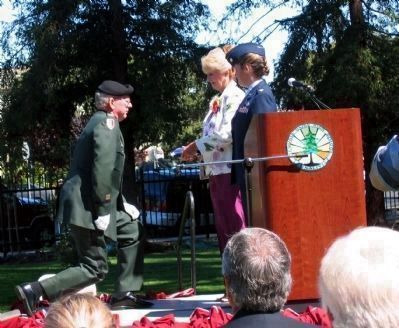 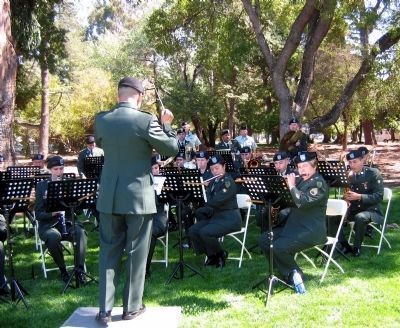 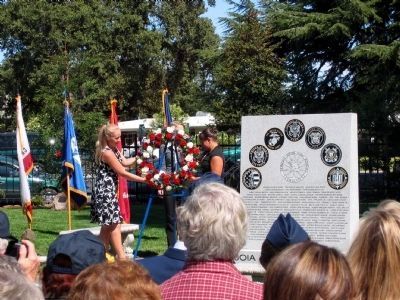 By Syd Whittle, September 17, 2005
8. Wreath Presentation
The two young women were students at Sequoia High School at that time. 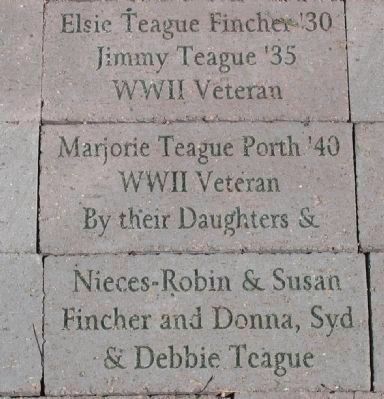