Site of the Tres Pinos Hotel 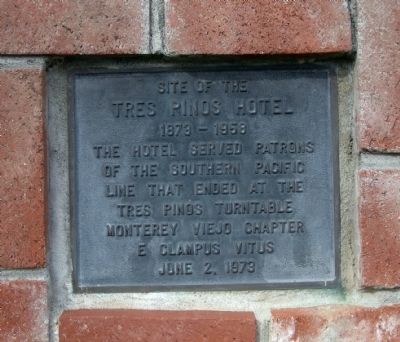 Topics and series. This historical marker is listed in these topic lists: Notable Buildings • Railroads & Streetcars. In addition, it is included in the E Clampus Vitus series list. A significant historical month for this entry is June 1799.

Location. 36° 47.441′ N, 121° 19.334′ W. Marker is in Tres Pinos, California, in San Benito County. Marker is at the intersection of California Route 25 and Fifth Street, on the right when traveling north on State Route 25. Touch for map. Marker is in this post office area: Tres Pinos CA 95075, United States of America. Touch for directions. 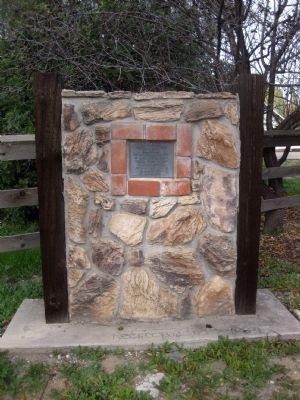 By Andrew Ruppenstein, January 16, 2010
2. Site of the Tres Pinos Hotel Marker and Monument
Although the marker was erected in 1973, writing in the cement at the base of the monument indicates that it was re-dedicated on August 25, 1984.

More about this marker. The marker is mounted on a monument at the corner of State Highway 25 (Airline Highway) and Fifth Street that is more easily seen when heading north (i.e. towards Hollister).

Regarding Site of the Tres Pinos Hotel. From A Memorial and Biographical History of the Coast Counties of Central California, by Barrows and Ingersoll (1893): "Tres Pinos (Three Pines) is a thriving town eight miles south of Hollister, and the terminus of the San Benito branch of the Southern Pacific railway, which was extended to that point in 1873. This is the shipping point for an extensive, and very productive region. Large quantities of grain, hay, dairy products, poultry, wool, hides, etc., are annually brought to the Tres Pinos station to be sent to market by rail." 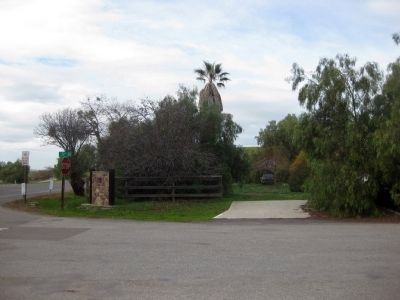