The Noble Train Of Artillery 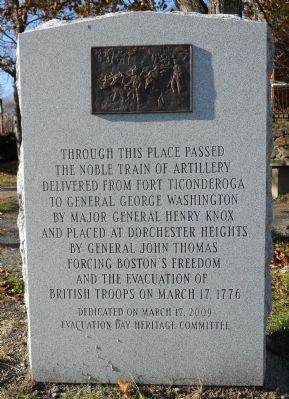 Photographed By Steve Swonk, December 16, 2009
1. Gen. Henry Knox Trail Marker at Roxbury
Inscription.
Gen. Henry Knox Trail. The Noble Train Of Artillery.
Through This Place Passed The Noble Train Of Artillery Delivered From Fort Ticonderoga To General George Washington By Major General Henry Knox And Placed At Dorchester Heights By General John Thomas Forcing Boston's Freedom And The Evacuation Of British Troops On March 17, 1776, Dedicated On March 17, 2009 Evacuation Day Heritage Committee . . This historical marker was erected in 2009 by Evacuation Day Heritage Committee. It is in Roxbury in Suffolk County Massachusetts

Through This Place Passed
The Noble Train Of Artillery
Delivered From Fort Ticonderoga
To General George Washington
By Major General Henry Knox
And Placed At Dorchester Heights
By General John Thomas
Forcing Boston's Freedom
And The Evacuation Of
British Troops On March 17, 1776

Topics and series. This historical marker is listed in these topic lists: Roads & Vehicles • War, US Revolutionary. In addition, it is included in the General Henry Knox Trail series list. A significant historical month for this entry is March 1799.

Location. 42° 19.832′ N, 71° 5.314′ W. Marker is in Roxbury, Massachusetts, in Suffolk County. Marker is on Malcolm X Blvd, on the right when traveling east. The Marker is on a point of a triangular piece of land between Malcolm X Blvd and Roxbury Street at Roxbury Heritage State Park, the site of General Thomas’ 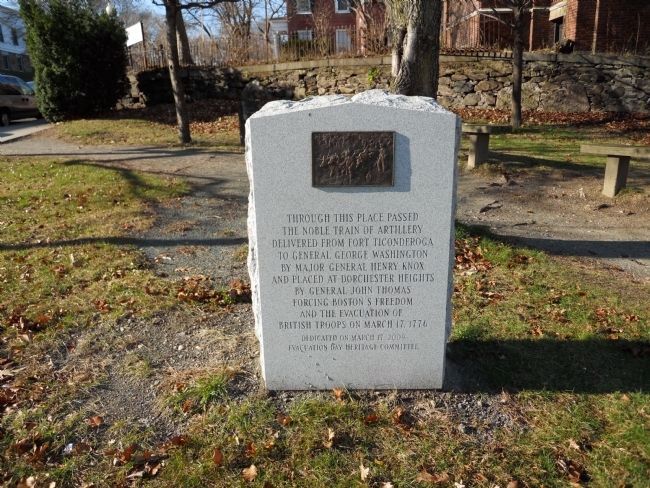 Click or scan to see
this page online
headquarters and home during the British siege of Boston. Roxbury is one of 21 official neighborhoods of Boston. Touch for map. Marker is in this post office area: Roxbury MA 02119, United States of America. Touch for directions.

More about this marker. This marker is a recent (2009) addition to the series of markers known as the as The Knox Cannon Trail which denotes the path followed by Henry Knox and his men between December 1775 and January 1776 to transport 59 captured weapon pieces from Fort Ticonderoga and Crown Point on Lake Champlain in New York to General George Washington at Dorchester Heights overlooking Boston, Massachusetts. The marker's format is similar to that of the previously existing markers in Massachusetts with some additional text.

In 1926 and 1927, the state of New York and Commonwealth of Massachusetts erected 56 plaques, one for each day that Knox and his troops guided the 60 tons of 18th-century artillery by ox-drawn sled through the frozen Hudson River valley in New York State and over the Berkshire mountains of Massachusetts to Cambridge, where Washington received them.

It is interesting to note that the Sesquicentennial markers of 1926 assign Henry Knox the rank of General, and this new Roxbury marker even has him as a two-star (Major) General. In fact Knox was a civilian who had offered his services to George Washington. The Continental Congress had commissioned Knox as Colonel of the Regiment of Artillery on December 2, 1775. Washington received a letter from John Hancock on December 12, 1775 with this news. Knox didn't learn this news until he met with Washington in Cambridge on January 24, 1776 when he arrived just ahead of the noble train of artillery he was bringing from Ticonderoga. Therefore, Knox was technically a Colonel during the trip from Ticonderoga to Boston, thought he wasn't aware of it until his mission was almost complete. Knox would later be promoted to Brigadier (one star) General on January 2, 1777 shortly after leading Washington's men in the famous Crossing of the Delaware River and winning the stunning victory at Trenton, New Jersey. Knox became the youngest Major (two-star) General in the American army when Congressional delegates appointed him on March 22, 1782.

A group of history buffs from Roxbury and South Boston celebrated victory last Saturday with the installation of an historical marker commemorating the neighborhood’s pivotal role in the siege of Boston during the Revolutionary War.

The granite tablet serves as the final marker in a 300-mile trail that stretches from Fort Ticonderoga in New York, where Gen. Henry Knox picked up the 59 cannons that Gen. George Washington’s army would use in the siege of Boston, all the way to Dorchester Heights, a hill in what is now South Boston from which Washington’s cannons forced the British to withdraw from Boston. 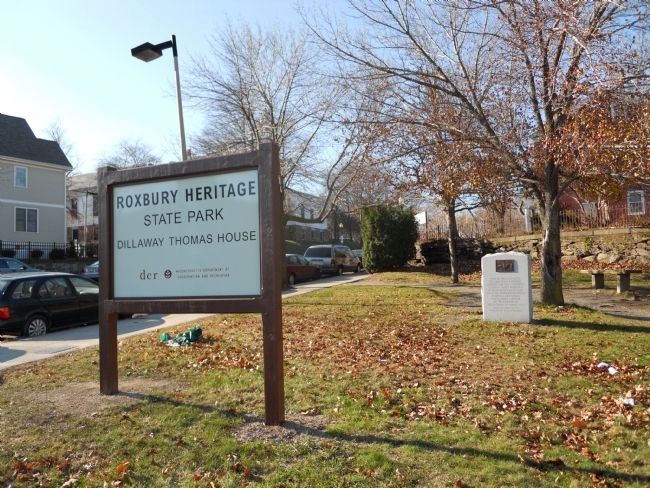 Photographed By Steve Swonk, December 16, 2009
3. Gen. Henry Knox Trail Marker at Roxbury Heritage State Park
and 1927, the state of New York and Commonwealth of Massachusetts erected 56 plaques, one for each day that Knox and his troops guided the 60 tons of 18th-century artillery by ox-drawn sled through the frozen Hudson River valley and over the Berkshires to Cambridge, where Washington received them.

There, at Cambridge Common, the trail markers stopped. While a 115-foot tower was erected in South Boston in 1902 to commemorate the fort where the cannons ended their journey, Roxbury’s role in the decisive Revolutionary War chapter has gone without official recognition.

“It’s always been an afterthought,” said Michael Bare, a member of the South Boston Citizens Association who is chairman of the Evacuation Day Heritage Committee. Bare worked with the Roxbury Highlands Historical Society and the National Park Service and Roxbury activists to have the marker erected.

It was in Roxbury on the night of March 16, 1776, where 3,000 of Gen. John Thomas’ troops gathered and, under cover of darkness, conveyed the cannons the final two miles to Dorchester Heights.

When the sun rose the morning of March 17, 1776, British troops were greeted with the sight of sunlight reflecting off the cannons. That afternoon, at approximately 3:17 p.m., the British agreed to withdraw, having secured Washington’s guarantee they wouldn’t be fired upon. 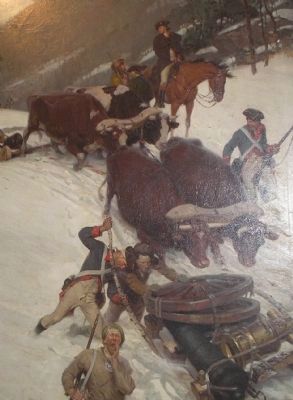 Photographed By Bill Coughlin, July 11, 2008
4. The Noble Train of Artillery
This Tom Lovell painting of Colonel Henry Knox and his soldiers transporting the cannons is on display at Fort Ticonderoga.
is celebrated on March 17 each year in Suffolk County as the official holiday of Evacuation Day.

The new marker was installed at the corner of Roxbury Street and Malcolm X Boulevard. About 40 people turned out for last Saturday’s dedication, including representatives from South Boston and Roxbury and a contingent of Lexington Minute Men re-enactors.

“Boston, for many years, has been a city of tribes,” she said. “In a year like this, [the joint effort] shows what we, working together, can do. It’s a powerful story.”

In 2004, Bare helped the Prince Hall Masons document and install a plaque at the Castle Island site where Prince Hall and 13 other men were sworn in as the first African Americans accepted into the fraternal order of Freemasonry.

The Minute Men re-enactors and historical society members began the day at the former site of the Roxbury High Fort, where the Cochituate Standpipe tower now stands atop Fort Hill. The re-enactors then marched to Roxbury Street towing a cannon atop a wheeled 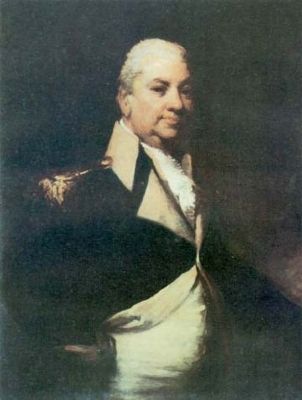 Bare said he was inspired by reading Gen. Knox’s story while a sixth-grader at the Roger Clapp School in Dorchester.

“He was an amazing American hero,” Bare said. “A founding father.”

Related markers. Click here for a list of markers that are related to this marker. These markers follow the route used by Knox to transfer cannons from Fort Ticonderoga to Cambridge, Mass and later to Dorchester Heights.