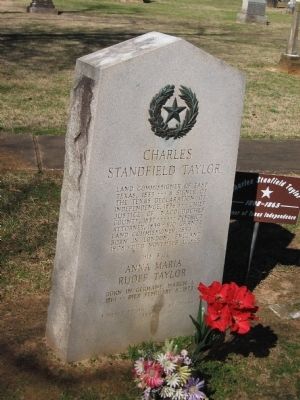 Topics and series. This historical marker is listed in these topic lists: Settlements & Settlers • War, Texas Independence. In addition, it is included in the Texas 1936 Centennial Markers and Monuments series list.

Other nearby markers. At least 8 other markers are within walking distance of this marker. John S. Roberts (here, next to this marker); Oak Grove Cemetery (about 300 feet away, measured in a direct line); Haden Edwards (about 300 feet away); "The Treaty" (approx. 0.2 miles away); Ancient Mound (approx. 0.2 miles away); Eugenia Sterne Park (approx. ¼ mile away); Site of Bivouac and Banquet for The New Orleans' Greys (approx. ¼ mile away); Home of Adolphus Sterne (approx. ¼ mile away). Touch for a list and map of all markers in Nacogdoches.
Credits. This page was last revised on September 14, 2020. It was originally submitted on February 5, 2010, by Steve Gustafson of Lufkin, Texas. This page has been viewed 842 times since then and 23 times this year. Photo   1. submitted on February 5, 2010, by Steve Gustafson of Lufkin, Texas. • Kevin W. was the editor who published this page.