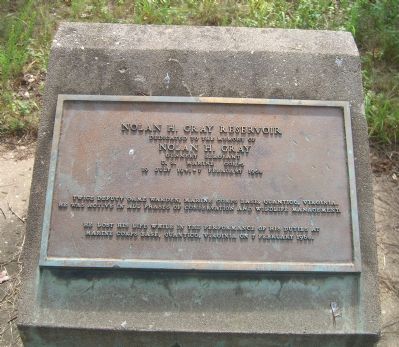 Twice Deputy Game Warden, Marine Corps Base, Quantico, Virginia. He was active in all phases of conservation and wildlife management.

He lost his life while in the performance of his duties at Marine Corps Base, Quantico, Virginia on 7 February 1968.

Topics. This historical marker is listed in this topic list: Environment.

Location. 38° 31.616′ N, 77° 22.858′ W. Marker is in Quantico Marine Corps Base, Virginia, in Prince William County. Marker is located along a gravel road accessed at the intersection of Interstate 95 and Russell Road (Exit 148). This gravel road crosses Chopawamsic Creek at two improved locations prior to reaching the marker. Touch for map. Marker is in this post office area: Quantico VA 22134, United States of America. Touch for directions.

Other nearby markers. At least 8 other markers are within 2 miles of this marker, measured as the crow flies. Prince William County / Stafford County (approx. 1.2 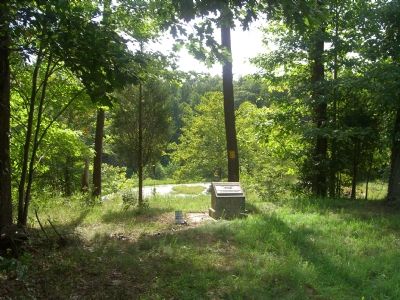 Regarding Nolan H. Gray Reservoir. This is a 1.8 acre reservoir located approximately 1.5 miles below Breckinridge Reservoir and is fed by Chopawamsic Creek. The reservoir has a concrete dam and a spillway at the southern end, and was formerly used as a holding pond for the Base water supply. The reservoir capacity is greatly reduced and water depth only averages about two feet due to sediment deposits.

A handicapped accessible fishing dock is available along the shoreline to provide accessible trout fishing. It is about one kilometer west of the junction of Russell Road and I-95.

Additional comments.
1. In honor of Gunnery Sergeant Nolan H. Gray, USMC
The reservoir is named for 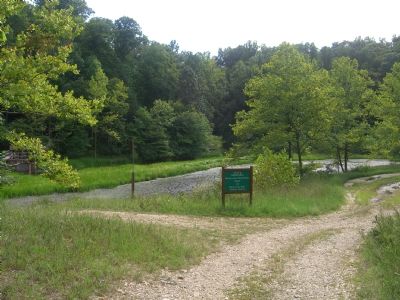 By Kevin W., September 9, 2007
3. Nolan H. Gray Reservoir
To fish here, you need both Virginia and MCB, Quantico fishing licenses.
Gunnery Sergeant Nolan H. Gray, United States Marine Corps. On 7 February 1968, a drowning accident at Lunga Reservoir took his life. GySgt Gray was in the performance of his duties as Deputy Game Warden, a position which he had held during a previous tour of duty at Quantico.

At the time of his death, GySgt Gray had served 8 ½ years in the U.S. Marine Corps. Prior to his second tour as Deputy Game Warden, he participated as an Infantry Unit Leader in Operations against the Viet Cong, Republic of Vietnam, for which he was awarded the Navy Commendation Medal with Combat Distinguishing Device.

Prior to renaming in his honor, the "water holding facility" was commonly referred to as the "holding dam". It was then, and still remains, a popular fishing area. Note To Editor only visible by Contributor and editor
— Submitted October 2, 2007, by Kevin W. of Stafford, Virginia.
2. Closure
Sir: As a family member I would like to know why [this web site page] was created. My family was not apprised of the creation of said site. We found out about the site by chance. There was much controversy in the wake of my brother’s death. I have always believed my brother’s death was one which was encompassed with a deep mystery 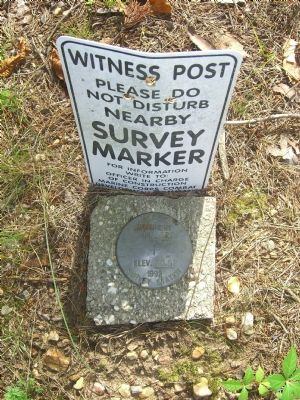 By Kevin W., September 9, 2007
4. Survey Marker near the Nolan H. Gray Reservoir Marker
This survey marker can be seen in picture 2, to the left of the Reservoir Marker.
behind it. My query is not to be critical but to try to understand the reason for the site at this time. We want to thank you as a family for the recognition of our brother. Nolan was a proud Marine from head to toe, and a very proud American.
— Submitted September 27, 2007, by John Paul Gray of Culloden, West Virginia.
3. RE: Closure
Thank you very much for your note and kind words about this page. In 1968 a number of people, now unknown, thought enough of Gunnery Sergeant Gray to place his name on this brass plaque. Our web site database was designed to inventory and catalog all historical markers so that they may have an audience wider than just people who stumble across markers like this while walking in the woods. Thanks to Kevin W. from Stafford, this marker can be read by anyone in the world on the Internet.

If you have a photo of Gunnery Sergeant Nolan H. Gray on your computer that you would like to add to this page, and any other information, I would be honored to publish it.
— Submitted September 27, 2007, by J. J. Prats of Powell, Ohio.
4. Daughter of John Morrissey, Nolan Gray’s Best Friend
I’ve come across some pictures since my parents have passed that include Nolan Gray’s son at my parents home dated 1/15/1967. Nolan was my dad’s best friend and in fact I have a picture of one of his sons and me sitting on my dad’s lap taken in Quantico Virginia in the quarters that were named after his father when he passed: Nolan Gray Quarters 2791-B MCS. If Gray family would like copies please contact an HMdb editor, who will forward your note to Ms. Morrissey.
— Submitted April 4, 2020, by Janet Morrissey of Smithsburg, Maryland.
5.
I hope to make it to the reservoir one day. Uncle Nolan is a man I never had the pleasure of meeting. Thank you all for honoring him!
— Submitted July 19, 2020, by Cathy L. Gray of Indianapolis, Indiana.
Credits. This page was last revised on July 20, 2020. It was originally submitted on September 13, 2007, by Kevin W. of Stafford, Virginia. This page has been viewed 2,146 times since then and 51 times this year. Last updated on September 27, 2007, by Kevin W. of Stafford, Virginia. Photos:   1, 2, 3, 4. submitted on September 13, 2007, by Kevin W. of Stafford, Virginia. • J. J. Prats was the editor who published this page.
Share This Page.