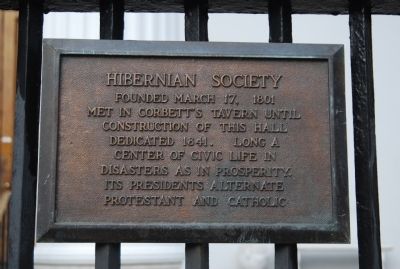 Hibernian Society
Founded March 17, 1801
Met in Corbett's Tavern until construction of this hall dedicated 1841. Long a civic life in disasters as in prosperity. Its presidents alternate Protestant and Catholic.

Topics and series. This historical marker is listed in these topic lists: Fraternal or Sororal Organizations • Notable Buildings. In addition, it is included in the National Historic Landmarks series list. A significant historical date for this entry is March 17, 1854. 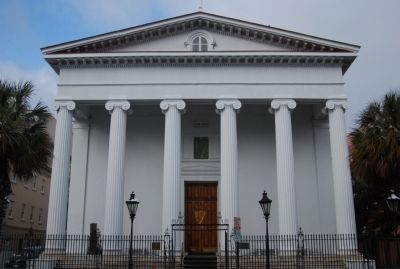 Additional commentary.
1. Hibernian Hall
Hibernian Hall, a National Historic Landmark, was built in 1840 to provide a meeting place for the Hibernian Society, an Irish benevolent organization founded in 1801. The Hall is the only extant building associated with the National Democratic Convention of 1860, one of the most critical political assemblies in this nation's history. Hibernian Hall served as the convention headquarters for the faction supporting Stephen 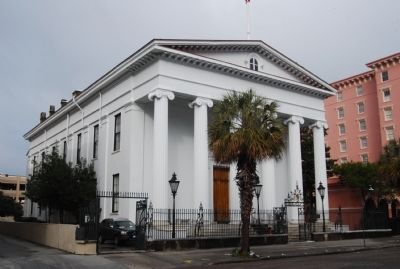 By Michael Sean Nix, February 13, 2010
3. Hibernian Hall
A. Douglas. It was hoped that Douglas would bridge the gap between the northern and southern delegates on the issue of extending slavery to the territories. The first floor of the Hall was used for meetings, while the second floor was filled with hundreds of cots for the delegates. The convention disintegrated no candidate was able to summon a two-thirds majority vote. This divisiveness resulted in a split in the Democratic party, and the election of Abraham Lincoln, the Republican candidate.

Hibernian Hall was the first semi-public building of pure Greek style to be built in the city, and the only building in Charleston designed by architect Thomas U. Walter of Philadelphia. Walter's design included an Ionic pediment which collapsed in the earthquake of 1886 and was replaced by a Corinthian pediment with brackets and a center circular-arched window. The dignified exterior of the Hall does not allude to the flamboyant ballroom and double stairhall within. The Irish harp carved in the panel above the main door and within the iron gates, as well as a stone from Ireland's Giant's Causeway, reflect the ethnic heritage of the Hall's founders. Christopher Werner, one of Charleston's foremost ironworkers, is responsible for the Hall's gates.

The Hibernian Society continues to meet regularly, holding annual elections, alternating each year between a Roman Catholic and 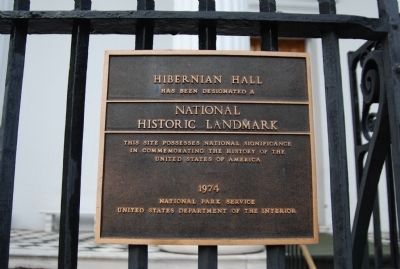 By Michael Sean Nix, February 13, 2010
4. Hibernian Hall Plaque
Hibernian Hall
has been designated a
National Historic Landmark
This site possesses National significance in commemorating the history of the united States of America
1974
National Park Service United States Department of the Interior
Protestant president. The Hall still serves as the location for many events, including an annual St. Patrick's Day celebration, society balls and other brilliant social occasions. 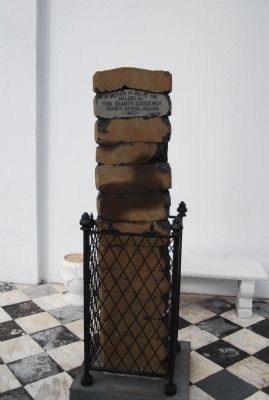 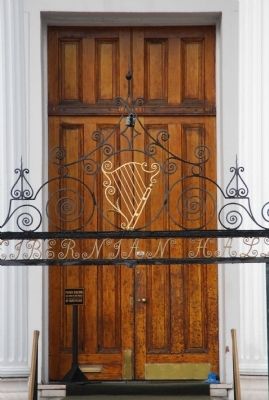 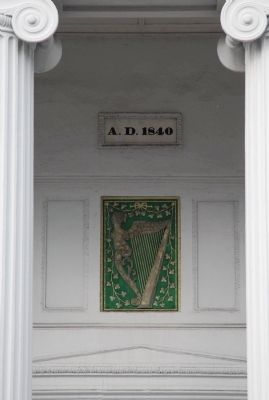