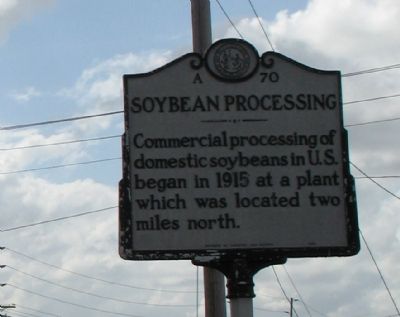 By Laura Troy, October 1, 2007
1. Soybean Processing Marker
Inscription.
Soybean Processing. . Commercial processing of domestic soybeans in U.S. began in 1915 at a plant which was located two miles north. . This historical marker was erected in 1982 by Division of Archives and History. It is in Elizabeth City in Pasquotank County North Carolina

Commercial processing of domestic soybeans in U.S. began in 1915 at a plant which was located two miles north.

Erected 1982 by Division of Archives and History. (Marker Number A70.) 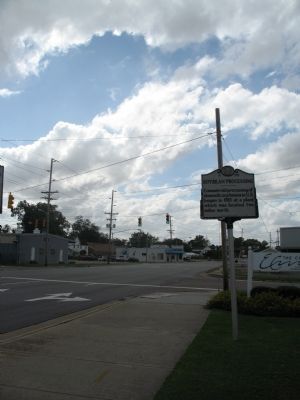 By Laura Troy, October 1, 2007
2. Soybean Processing Marker
With the boll weevil taking its toll on North Carolina’s cotton industry, the Elizabeth City Oil and Fertilizer Company, incorporated to manufacture cottonseed oil and other cotton by-products, tried its hand at a new commodity on December 13, 1915. At that time, under the management of William Thomas Culpepper, the company crushed approximately 20,000 bushels of soybeans, generating the first commercially produced domestic soybean oil in the country. The manufacture of the soybean oil was completed without a single alteration in existing equipment. Both the oil and the residual “cake,” usually ground into meal, were highly marketable. Other oil mills, in towns such as Winterville, New Bern, Farmville, and Wilson, began working with soybean oil shortly thereafter. The advent of domestic soybean processing made the easily grown plant popular throughout North Carolina.

The soybean was first planted in America in the late 1800s as forage for livestock. In 1904, George Washington Carver discovered that the soybean was a good source of protein and oil. He also learned, in experimenting with crop rotation, that planting soybeans for two years actually helped improve the soil conditions for later cotton crops. Following such research, soybean production increased. The plants flourish in North Carolina’s hot, humid summers, and as of 2002, the state ranks fifteenth in the nation in soybean yields. At the time of the first processing in Elizabeth City, North Carolina was the leading producer of the legume.

The oil processing plant was located on property at the junction of Ehringhaus and McMorrine Streets in Elizabeth City. It is no longer standing.