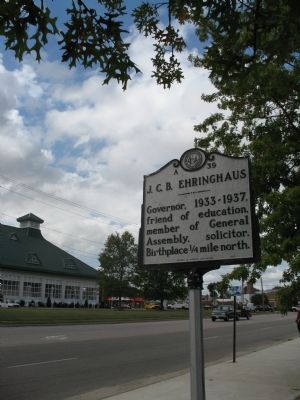 By Laura Troy, October 1, 2007
1. J.C.B. Ehringhaus Marker
Inscription.
J. C. B. Ehringhaus. . Governor, 1933-1937, friend of education, member of General Assembly, solicitor. Birthplace ¼ mile North. . This historical marker was erected in 1977 by Division of Archives and History. It is in Elizabeth City in Pasquotank County North Carolina

Erected 1977 by Division of Archives and History. (Marker Number A-39.)

More about this marker. This marker also sits with A-61

Regarding J. C. B. Ehringhaus. 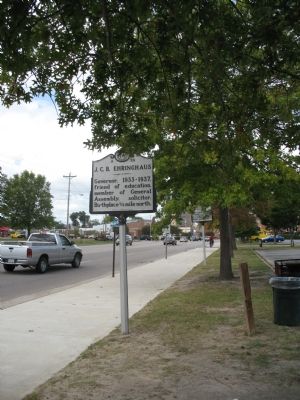 By Laura Troy, October 1, 2007
2. Both Markers
A fiscal conservative, John Christoph Blucher Ehringhaus (1882–1949) balanced the state’s budget during the worst economic crisis since Reconstruction while offering nominal if unenthusiastic support for the initiatives of the New Deal. The “Depression Governor” was born in Elizabeth City on February 5, 1882.

Proud of the history of the Albemarle region of North Carolina and of his own German ancestry, Blucher Ehringhaus, as he was known, was the son of merchant Erskine Ehringhaus and the former Catherine Matthews. Educated in local schools, he was graduated from Atlantic Collegiate Institute in 1898 and from the University of North Carolina in 1901. Two years later, Ehringhaus received his law degree in Chapel Hill and returned to his hometown to practice. In 1912 he married Matilda Haughton of Washington County; they would have three children.

From Pasquotank County in 1905, at age twenty-three, J. C. B. Ehringhaus was elected to the state House for the first of two consecutive terms. In the legislature, where he was the youngest member, he cosponsored the bill to establish East Carolina Teachers Training School (today East Carolina University) and supported a statewide system of high schools. In 1910 Ehringhaus was elected solicitor of the First Judicial District, a post he would hold for twelve years.

In 1928 the Elizabeth City attorney canvassed the state on behalf of the Democratic ticket, Al Smith for president and O. Max Gardner for governor. Four years later Gardner backed Ehringhaus over his opponents in the Democratic primary, Lieutenant Governor Richard T. Fountain and Revenue Commissioner Allen J. Maxwell. In his campaign in 1932, Ehringhaus called for a “program of progress” and for a balanced budget, goals which meshed with Gardner’s policies. In the fall Ehringhaus easily defeated Republican Clifford C. Frazier.

Ehringhaus balanced the budget through retrenchment, consolidation, and the introduction of a three percent sales tax on all items except for food staples. That tax, tied to state assumption of school costs and reduction in local property taxes, ran counter to a campaign promise but, with the governor’s backing, passed the 1933 legislature.

Ehringhaus cut the cost of state government by almost one-third through a reduction in employee salaries and drastic curtailment of spending including a halt to all new highway construction for the 1933-34 biennium. He endorsed penal reform and rural electrification and encouraged the consolidation of state offices, such as the highway and prison departments, and local governments. The school year was extended from six to eight months.

In September 1933 Ehringhaus closed the tobacco markets in North Carolina and traveled to Washington, D.C., to lobby officials of the Agricultural Adjustment Administration for higher prices for the commodity. The move earned plaudits from Tar Heel farmers. Those same tobacco growers were unforgiving two years later when the governor refused to issue a call for a special session of the legislature to debate the proposed compact of tobacco-growing states. Ehringhaus appeared before a rally of 6,000 farmers at Riddick Stadium in Raleigh on April 21, 1935, and, in a heated ninety-minute speech, held to his position that the compact would not benefit the state.

Ehringhaus offered his rhetorical support to President Franklin D. Roosevelt’s New Deal programs but followed his own cautious path. He declined to provide state matching funds to the Emergency Relief Administration and delayed implementation of provisions of the Social Security Act, passed in 1935, until 1937. His popularity sank after 1935 and, in the speech at Riddick Stadium, he declared that he had had “a bellyfull of public office.” He declined to run for the U.S. Senate and returned to the practice of law in Raleigh. An Episcopalian, Ehringhaus died on July 31, 1949 and is buried in Elizabeth City.

Copied from the North Carolina Department of Cultural Resources