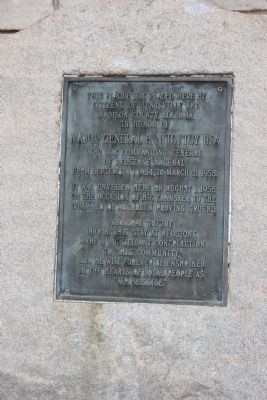 This plaque was placed here by Citizens of Huntsville and Madison County, Alabama, In Honor Of Major General H.N. Toftoy, USA. Who was Commanding General of Redstone Arsenal from September 1, 1954, to March 31, 1958. It was unveiled here on August 1, 1958, on the occasion of his transfer to the command of Aberdeen Proving Ground.

General Toftoy during his stay at Redstone made a significant contribution to this community, and he will forever be enshrined in the hearts of local people as "Mr. Missile."

Erected 1958 by Citizens of Huntsville.

Topics. This historical marker is listed in these topic lists: Air & Space • Military. A significant historical month for this entry is March 1973.

Other nearby markers. At least 8 other markers are within walking distance of this marker. First Bank In Alabama (within shouting distance