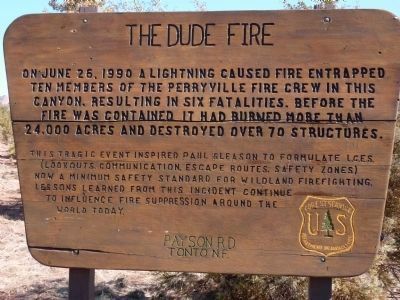 March 5, 2010
1. The Dude Fire Marker
Inscription.
The Dude Fire. . , On June 25, 1990 a lightning caused fire entrapped ten members of the Perryville fire crew in this canyon. Resulting in six fatalities. Before the fire was contained it had burned more than 24,000 acres and destroyed over 70 structures. , This tragic event inspired Paul Gleason to formulate L.C.E.S. (Lookout, Communication, Escape Route, Safety Zones) now a minimum safety standard for wildland firefighting. Lessons learned from this incident continue to influence fire suppression around the world today. . This historical marker was erected by United States Forest Service, Tonto National Forest, Payson Ranger District, Paid and Volunteer Staff Time. It is Near Payson in Gila County Arizona

On June 25, 1990 a lightning caused fire entrapped ten members of the Perryville fire crew in this canyon. Resulting in six fatalities. Before the fire was contained it had burned more than 24,000 acres and destroyed over 70 structures.

Topics. This historical marker is listed in these topic lists: Disasters • Environment • Horticulture & Forestry. A significant historical month for this entry is June 1645. 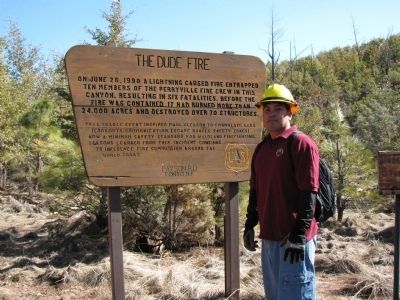 More about this marker. There is a small parking lot on the North side of the road. The sign marks the head of Walk Moore Canyon, site of the Dude Fire entrapment in 1990.

Regarding The Dude Fire. The Dude Fire fatality site is part of a "Staff Ride" used to train Wildland Fire professionals in safety and decision making. The ride puts participants in the shoes and minds of a local unit administrator (i.e. USFS Ranger District) and people fighting fire on the ground. The Staff Ride tries to re-create the situation on the day of the event, and stimulate thought, discussion, and a final distillation of the Lessons Learned. In 1990, the Dude Fire investigation and review helped create reform in firefighter work practices (shift length), physical fitness requirements, fire communications, extreme fire behavior training, 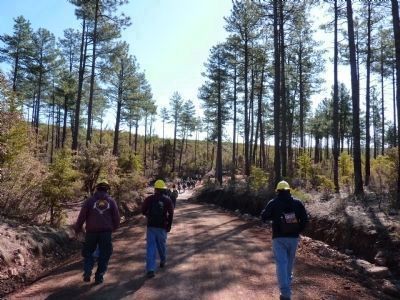 March 5, 2010
3. Attendees of a Dude Fire Staff Ride Walk Through Forest Remnants
The effects of the Dude Fire are visible twenty years after the fire. A few remnant pines are shown here. The intention on the second day of the fire was to protect housing east of Walk Moore Canyon, stop the main head of the fire, and keep fire size to a minimum.
fire shelter location on line packs, creation of the Lessons Learned Center, and refinement of drought, weather and other extreme fire prediction techniques. This event crystallized Paul Gleason's formulation of L.C.E.S to distill the 10 Standard Firefighting Orders and 18 Watchout Situations into four easy to remember safety points: Lookouts, Communication, Escape Routes, Safety Zones. Superintendent of Oregon's Zig-Zag Hotshot crew, Gleason was the first person on scene at the main entrapment site.

4. Rim Country Musuem Web Page. 2010 page is devoted to the 20th anniversary observations for the Dude Fire. (Submitted on May 11, 2010, by Chris English of Phoenix, Arizona.) 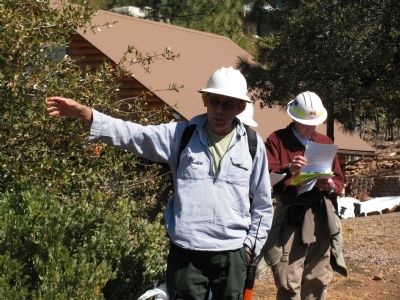 Photographed By Leon Ben Jr., March 5, 2010
4. Building the June 26, 1990 Scenario
Jonathan Lee, Foreman of the Plumas Hotshots on June 26, 1990 discusses the conditions and events leading to the Dude Fire Entrapment immediately south of the Safety Zone near the Corner House. More than 130 people evacuated to the safety zone about 2 P.M. on June 26, 1990. 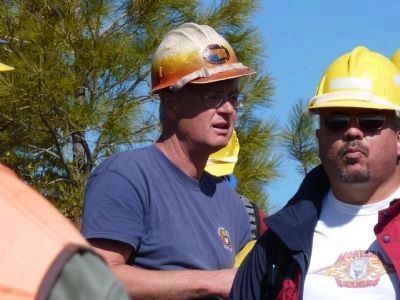 March 5, 2010
5. Max Wahlberg Presents His Experience on the Dude Fire
Wahlberg played several roles on the Dude Fire and is one of the Wildland Fire professionals maintaining the staff ride and often donating time to maintain trails, and prepare documents, maps and photos. Darryl Martinez, Bureau of Indian Affairs Southwest Region Burned Area Emergency Rehabilitation expert and Coordinator gets serious with the photographer. 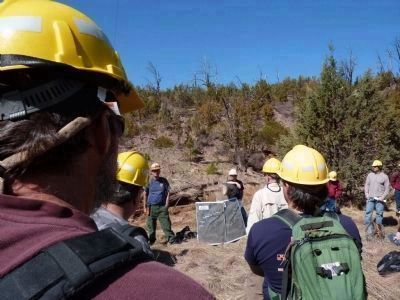 March 5, 2010
6. Stop Near the Walk Moore Canyon Power Line
Early morning events of June 26 are set up. The Perryville crew had already worked, traveled and staged 30 hours and were put into the canyon at 2:30 AM. Twelve hours later the fire developed into what used to be a rare "plume dominated" fire, pushing over 60,000 feet into the sky, then collapsing as the heat column cooled in the upper air. 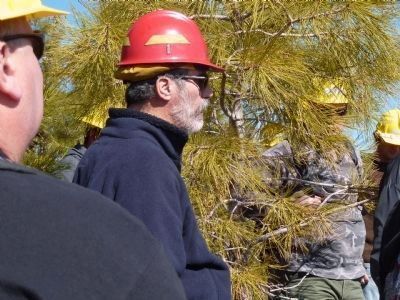 March 5, 2010
7. J.P. Mattingly, Superintendant of the Alpine Hot Shots June 26, 1990
Mattingly, Crew Superintendent, was on scene June 26 during every turn of events. He and other crew Superintendents were instrumental in saving the lives of their crews, local fire department employees and members of the press. 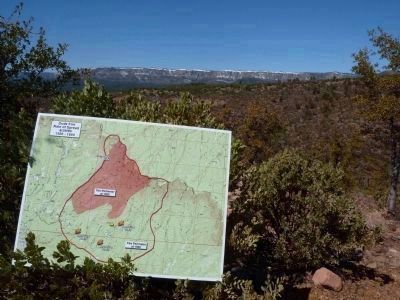 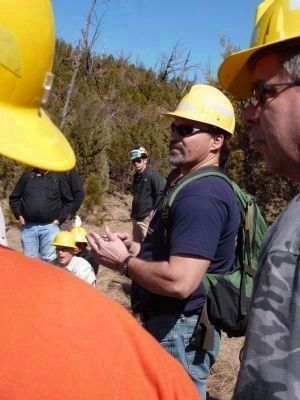 March 5, 2010
9. Bodie Shaw, Former Member of the Flathead Interagency Hot Shot Crew
On June 26, 1990, Shaw's crew and six others were saved by crew Superintendent intuition and awareness, and a very large safety zone, a large burned over area with a center zone cleared by a bulldozer immediately before the blow-up. The Perryville Crew responded late to a member of Navajo Scout Crew 2 who shouted at them to leave Walk Moore Canyon. Their fire shelters were buried under equipment in their packs. Some members of the crew died helping others get into shelters. Other crew memberss deployed fire shelters improperly, and others paniced, ran, and were overcome by heat and gases. Shaw is now Deputy Director, Bureau of Indian Affairs programs, National Interagency Fire Center. Right foreground, in camo, is Lyle Carlile, Director BIA NIFC programs.
Credits. This page was last revised on August 3, 2022. It was originally submitted on March 6, 2010. This page has been viewed 4,652 times since then and 88 times this year. Photos:   1. submitted on March 6, 2010.   2. submitted on March 8, 2010.   3, 4, 5, 6, 7, 8, 9. submitted on March 6, 2010. • Syd Whittle was the editor who published this page.
Share this page.