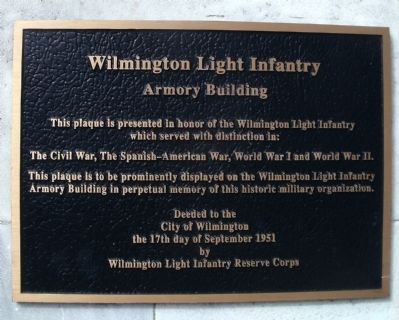 This plaque is presented to the Wilmington Light Infantry which served with distinction in:

The Civil War, The Spanish-American War, World War I and World War II.

This plaque is to be prominently displayed on the Washington Light Infantry Armory Building in perpetual memory of this historic military organization.

Topics. This historical marker is listed in these topic lists: Notable Buildings • War, Spanish-American • War, US Civil • War, World I • War, World II. A significant historical month for this entry is September 1951.

Other nearby markers. At least 8 other markers are within walking distance of this marker. Historic First Baptist Church (a few steps from this marker); Wilmington Coup 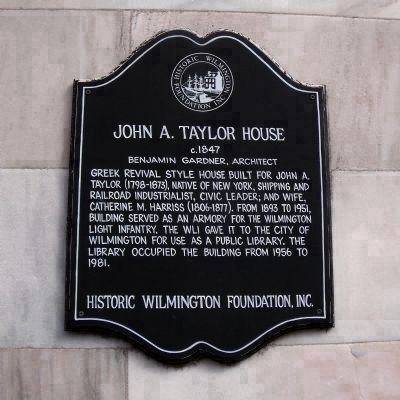 By Bernard Fisher, March 11, 2010
2. John A. Taylor House
c.1847
Benjamin Gardner, architect
Greek revival style house built for John A. Taylor (1798-1873), native of New York, shipping and railroad industrialist, civic leader; and wife, Catherine M. Harriss (1806-177). From 1893 to 1951, building served as an armory for the Wilmington Light Infantry. The WLI gave it to the City of Wilmington for use as a public library. The library occupied the building from 1956 to 1981. Historic Wilmington Foundation, Inc. 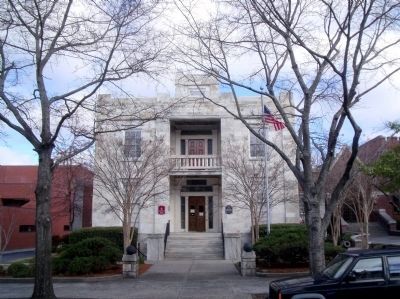