The Woman’s Club of Georgetown 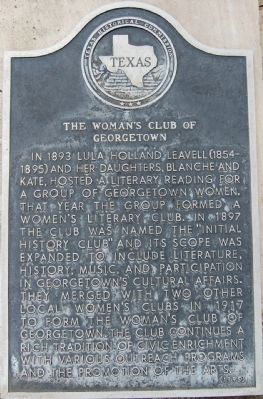 In 1893 Lula Holland Leavell (1854-1895) and her daughters, Blanche and Kate, hosted a literary reading for a group of Georgetown women. That year the group formed a women’s literary club. In 1897 the club was named the “Initial History Club” and its scope was expanded to include literature, history, music, and participation in Georgetown’s cultural affairs. They merged with two other local women’s clubs in 1917 to form the Woman’s Club of Georgetown. The club continues a rich tradition of civic enrichment with various outreach programs and the promotion of the arts.

Topics. This historical marker is listed in these topic lists: Fraternal or Sororal Organizations • Women. A significant historical year for this entry is 1893.

Location. 30° 38.02′ N, 97° 40.028′ W. Marker is in Georgetown, Texas, in Williamson County. Marker can be reached from E. University Ave.. The marker is on a cement slab just east of the Southwestern University main building. Touch for map. Marker is at or near this postal address: 1000 E University Ave, Georgetown TX 78626, United States of America. Touch for directions. 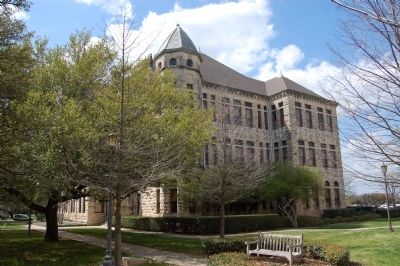 By Keith Peterson, March 20, 2010
2. The Woman’s Club of Georgetown Marker
Marker is on cement slab at the bottom of photo a little left of center.