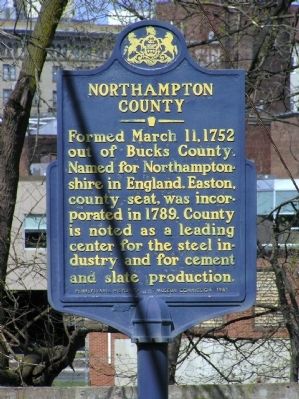 Formed March 11, 1752 out of Bucks County. Named for Northamptonshire in England. Easton, county seat, was incorporated in 1789. County is noted as a leading center for the steel industry and for cement and slate production.

Topics and series. This historical marker is listed in these topic lists: Industry & Commerce • Political Subdivisions. In addition, it is included in the Pennsylvania Historical and Museum Commission series list. A significant historical date for this entry is March 11, 1738.

Location. 40° 41.274′ N, 75° 12.35′ W. Marker is in Easton, Pennsylvania, in Northampton County. Marker is on South Delaware Drive (Pennsylvania Route 611) ¼ mile east of Smith Avenue, on the right when traveling north. Touch for map. Marker is in this post office area: Easton PA 18042, United States of America. Touch for directions. Related marker. Click here for another marker that is related to this marker. Bucks County Marker.