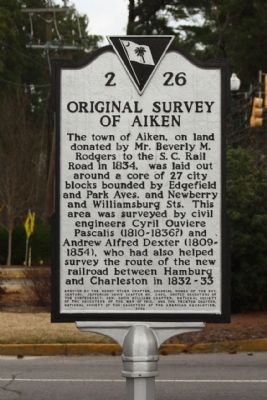 Photographed By Mike Stroud, 2010
1. Original Survey of Aiken Marker
Inscription.
Original Survey of Aiken. . , The town of Aiken, on land donated by Mr. Beverly M. Rodgers to the S.C. Rail Road in 1834, was laid out around a core of 27 city blocks bounded by Edgefield and Park Aves. and Newberry and Williamsburg Sts. This area was surveyed by civil engineers Cyril Ouviere Pascalis (1810-1836?) and Andrew Alfred Dexter (1809-1854), who had also helped survey the route of the new railroad between Hamburg and Charleston in 1832-33. . This historical marker was erected in 2004 by the Henry Tyler Chapter, Colonial Dames of the XVII Century, Jefferson Davis Chapter #2465, United Daughters of the Confederacy, and the Gen. David Williams Chapter, National Society of the Daughters of the War of 18 12. It is in Aiken in Aiken County South Carolina

The town of Aiken, on land donated by Mr. Beverly M. Rodgers to the S.C. Rail Road in 1834, was laid out around a core of 27 city blocks bounded by Edgefield and Park Aves. and Newberry and Williamsburg Sts. This area was surveyed by civil engineers Cyril Ouviere Pascalis (1810-1836?) and Andrew Alfred Dexter (1809-1854), who had also helped survey the route of the new railroad between Hamburg and Charleston in 1832-33.

Erected 2004 by the Henry Tyler Chapter, Colonial Dames of the XVII Century, Jefferson Davis Chapter #2465, United Daughters of the Confederacy, and the Gen. David Williams Chapter, National Society of the Daughters of the War of 1812. (Marker Number 2-26.)

Topics and series. This historical marker is listed in these topic lists: Notable Places • Railroads & Streetcars • Settlements & Settlers. In addition, it is included in the The Colonial Dames XVII Century, National Society, and the United Daughters of the Confederacy series lists. A significant historical year for this entry is 1834. 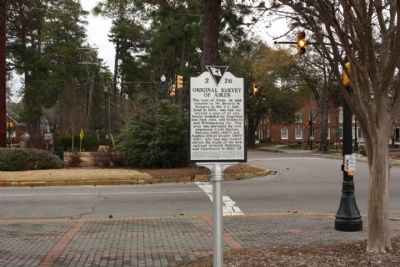 Regarding Original Survey of Aiken. Three historical events generally shaped the physical development of Aiken: construction of the railroad line between Charleston, SC. and Hamburg, SC. in the 1830’s, the development of a winter resort industry based on equestrian sports in the 1880’s, and the establishment of the Savannah River Plant, a nuclear weapons facility, in the 1950’s. Today, Aiken reflects the influence of these events in the layout of its streets, the distribution of its neighborhoods, and the remarkable architecture 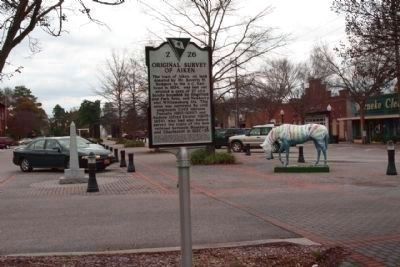 Photographed By Mike Stroud, March 14, 2010
3. Original Survey of Aiken Marker seen looking south along Newberry Street
at the left is seen the Aiken Time Capsule and at right is one of the original 31 painted horses in and around Aiken.
spread throughout the City limits.
Leaders of the South Carolina Railroad and Canal Company wanted to develop real estate along the line to appeal to South Carolina residents wanting to escape the heat and disease associated with the summer months.The company’s engineers designed the town of Aiken to have plenty of trees and open spaces which were believed to provide a healthier living environment.
A group of Charleston, South Carolina businessmen incorporated the South Carolina Rail Road and Canal Company (SCRRCC) in December 1827. William Aiken, one of South Carolina’s leading cotton merchants, served as president of the company between 1829 and 1831. SCRRCC wanted to develop a
transportation link between Charleston and Augusta that would redirect trade that was going down the river to Savannah. Horatio Allen, an engineer from New York, selected the route from Charleston. Allen was nationally famous for supervising the first railroad in America, a short line for the Delaware and Hudson Canal Company. He was also the first person in the western hemisphere to drive a locomotive. The railroad line ran along the ridge between the Ashley and Cooper Rivers, crossed the Edisto River, and then turned west, following ridges towards Augusta and terminating in Hamburg, SC opposite Augusta. Between 1830 and 1833, the SCRRCC constructed the 136-mile, single-track line from Charleston 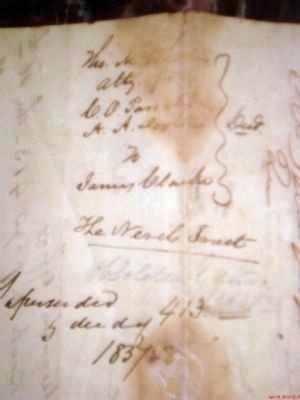 Photographed By Ivie Diane Avery
4. Original Survey of Aiken
to Hamburg, creating the longest passenger railroad in the world at the time. It had three sections. The main section connected Charleston to Edisto Bridge (today known as Branchville), where the line branched into east and west lines. The eastern section went to Columbia. The western section passed through the towns of White Pond, Windsor, and Montmorenci, before reaching Hamburg. The western section was completed in the fall of 1833
In the early years of the Winter Colony, visitors often rented houses or rooms in town, but over, the following decades, families constructed their own homes, some establishing permanent residence in Aiken. In this period, families associated with the Winter Colony built exquisite mansions, often accompanied by extensive stable facilities and adorned with lavish, formal gardens. The Second World War,
coming on the heels of the Great Depression, disrupted the seasonal arrival of winter visitors.
In 1952, the Atomic Energy Commission constructed the Savannah River Plant, an atomic energy facility on the Savannah River, at a site approximately fifteen miles from Aiken. Thousands of construction workers and plant personnel arrived in Aiken, first occupying hastily constructed temporary housing and then establishing new residential subdivisions pushing up against the historic neighborhoods of Aiken. Much of the plant-related residential development 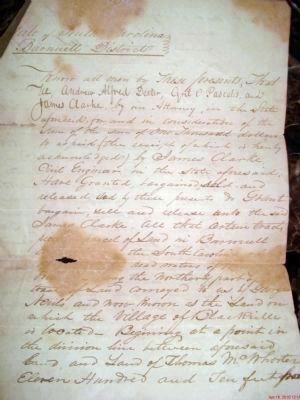 Also see . . .
1. The South Carolina Railroad. was the direct successor of the South Carolina Canal and Rail Road Company, which had operated its 136-mile line from Charleston, SC to Hamburg, SC since 1833. (Submitted on April 9, 2010, by Mike Stroud of Bluffton, South Carolina.) 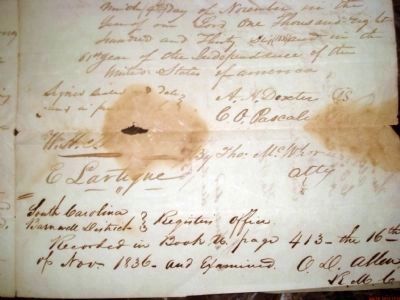 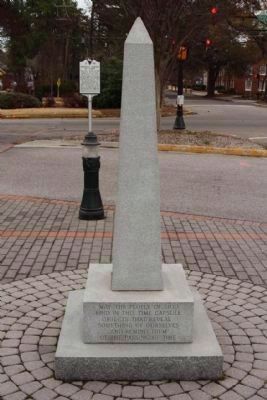 Photographed By Mike Stroud, March 14, 2010
7. Survey of Aiken Marker and the Aiken Time Capsule
South Face
May the people of 2100
find in this time capsule
objects that reveal
something of ourselves
and remind them
of the passing of time. 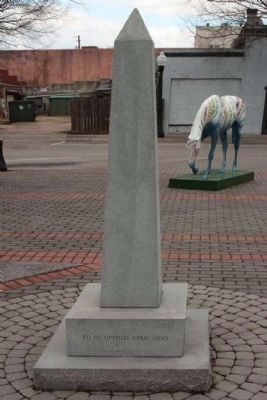 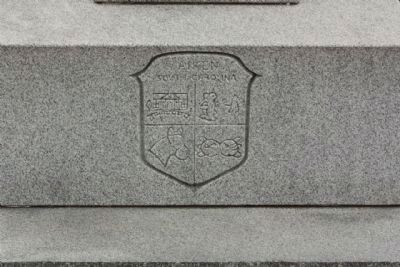 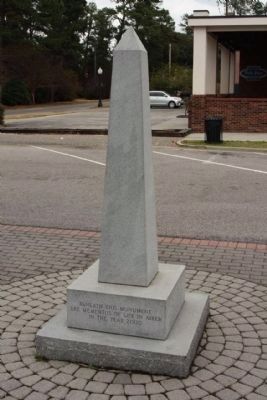 Photographed By Mike Stroud, March 14, 2010
10. Time Capsule
West face
Beneath this monument
are mementos of life in Aiken
in the year 2000. 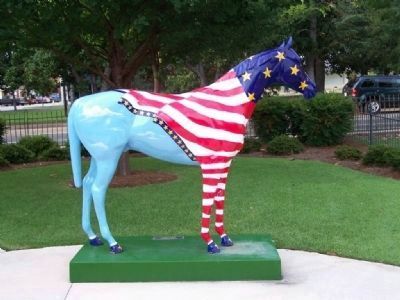 Photographed By Mike Stroud, July 25, 2008
11. A painted Horse of the City of Aiken
It’s hard to pass through the city without noticing the horses reminiscent of the Horse Play days. In October 2003, the Aiken Center for the Arts, United Way and the City of Aiken partnered in the Horse Play project. According to Bill Reynolds, coordinator of Horse Play, the idea was to create 31 unique hand-painted horses to display in the downtown area. Hundreds of artists submitted designs and the submissions were narrowed. Sponsors then selected the designs for their horse, and the paint began to fly. The horses remained on display until the spring of 2004 when they were auctioned at a black tie gala held in conjunction with the Aiken Spring Steeplechase. “About 10 to 12 remain on public display as they were purchased at the auction and donated for permanent public display on public property,” said Reynolds. The horses now serve as a beacon to visitors of the community and enhance the aesthetics for all to enjoy. The city's growing interest in the arts inspired the project, titled Horseplay, which naturally reflects the city's historic status as an equestrian center. Horse towns like Lexington, KY, Saratoga Springs, NY, and Ocala, FL, successfully hosted projects using the horse as the artist's empty canvas.(City of Aiken)
Credits. This page was last revised on June 16, 2016. It was originally submitted on April 9, 2010, by Mike Stroud of Bluffton, South Carolina. This page has been viewed 1,866 times since then and 137 times this year. Photos:   1, 2, 3. submitted on April 9, 2010, by Mike Stroud of Bluffton, South Carolina.   4, 5, 6. submitted on May 22, 2010, by Ivie Diane Avery of Port Saint Lucie, Florida.   7, 8, 9, 10, 11. submitted on April 9, 2010, by Mike Stroud of Bluffton, South Carolina. • Bill Pfingsten was the editor who published this page.
Share this page.