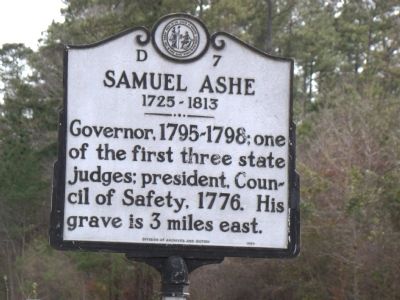 Erected 1994 by Division of Archives and History. (Marker Number D-7.)

Topics and series. This historical marker is listed in this topic list: Colonial Era. In addition, it is included in the North Carolina Division of Archives and History series list. A significant historical year for this entry is 1798. 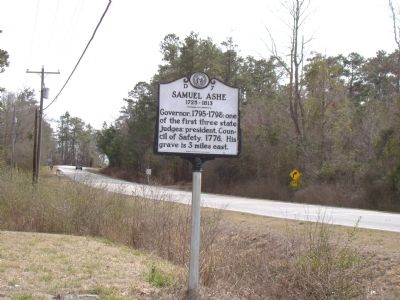 Ashe was born in Beaufort, North Carolina. His father, John Baptista Ashe, and brother, John Ashe, both served as Speaker of the North Carolina Colonial Assembly, or House of Burgesses. Ashe became an orphan at the age of 9. He married Mary Porter in 1748; they had three children, including John Baptista Ashe, who would serve in the Continental Congress. After Mary died, Ashe remarried, this time to Elizabeth Merrik.

Ashe studied law and was named Assistant Attorney for the Crown in the Wilmington district of the colony.

In 1795, the General Assembly elected him governor at the age of 70. He served three one-year terms, the maximum constitutional limit, before retiring in 1798. Ashe continued to remain active in politics after his term as governor, serving as a member of the United States Electoral College in 1804.

Editor’s want-list for this marker. Photos of his gravesite • Can you help?
Share this page.