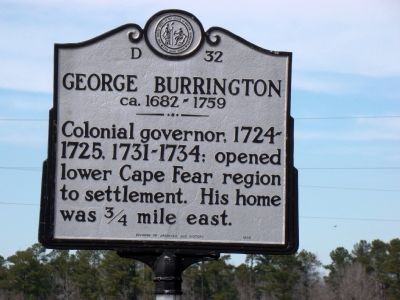 Erected 1999 by Division of Archives and History. (Marker Number D-32.)

Topics and series. This historical marker is listed in this topic list: Colonial Era. In addition, it is included in the North Carolina Division of Archives and History series list. A significant historical year for this entry is 1725. 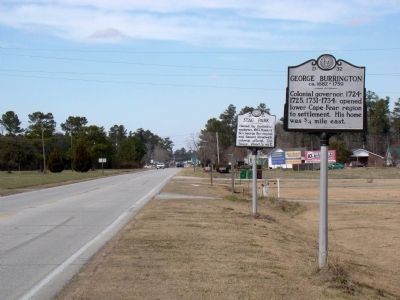 Click or scan to see
this page online
George Burrington. “George Burrington is known as the first ‘Royal Governor’ of North Carolina. He was first appointed Governor of North Carolina on January 15, 1724, because his father had been active in support of the British government at the accession of George I.   Burrington was ignorant and profligate, and on 7 April, 1725, was succeeded by Sir Richard Everard.

“His retirement angered him so much that he proceeded to make himself disagreeable to Everard in various ways, and was several times indicted for disorderly conduct, once for knocking loudly on the new governor’s door, calling him ‘a noodle and an ape,’ and declaring that he was ‘no more fit to be governor than Sancho Panza.’ “Burrington did not appear at the time set for his trial, and a nolle prosequi was finally entered by the governor’s order. Burrington left the colony, and in 1730, when Everard was removed, the home government, strangely enough, considering his previous experience, sent him out again as governor of North Carolina.

“He arrived the second time in February, 1731, and conducted himself with such a want of prudence as to increase the number of his enemies. Riding across the country one day, and observing that a poor man had built a cabin on his land, the governor ordered his servant to burn the cabin. Finally, knowing that Smith, late chief justice of the colony, had been sent to England by the council to complain of him, Burrington left, in April, 1734, ostensibly on a visit to South Carolina, but went immediately to England. Some time after this he engaged in a drunken frolic in London, and was found murdered one morning in St. James’s park—he died there in 1734.” (Submitted on April 28, 2010.)
Credits. This page was last revised on June 16, 2016. It was originally submitted on April 28, 2010, by J. J. Prats of Powell, Ohio. This page has been viewed 801 times since then and 58 times this year. Photos:   1, 2. submitted on April 28, 2010, by J. J. Prats of Powell, Ohio.
Share this page.