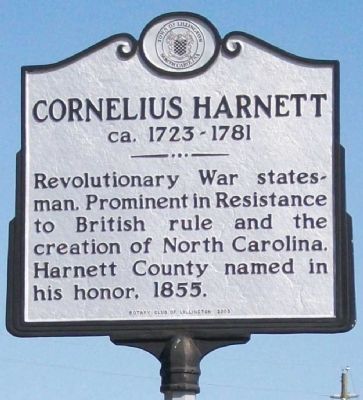 By Robert Cole, May 9, 2010
1. Cornelius Harnett Marker
Inscription.
Cornelius Harnett. ca. 1723-1781. Revolutionary War statesman. Prominent in Resistance to British rule and the creation of North Carolina. Harnett County named in his honor, 1855. . This historical marker was erected in 2003 by Rotary Club of Lillington. It is in Lillington in Harnett County North Carolina

Revolutionary War statesman. Prominent in Resistance to British rule and the creation of North Carolina. Harnett County named in his honor, 1855.

Erected 2003 by Rotary Club of Lillington.

Topics. This historical marker is listed in these topic lists: Settlements & Settlers • War, US Revolutionary. A significant historical year for this entry is 1855.

Location. 35° 25.224′ N, 78° 48.52′ W. Marker is in Lillington, North Carolina, in Harnett County. Marker is on West Cornelius Harnett Boulevard (U.S. 401) half a mile west of North Main Street (State Highway 210), on the right when traveling east. At the main entrance driveway to new Harnett County courthouse, justice center, and social services complex north of the Cape Fear River bridge in Lillington. Touch for map. Marker is at or near this postal address: 305 W Cornelius Harnett Blvd, Lillington NC 27546, United States of America. Touch for directions.

Regarding Cornelius Harnett. One of the chief master spirits of the Revolution, in North Carolina, was Cornelius Harnett, of Wilmington. He was born in England in 1723, and came to America in early life. He was a man of wealth and distinction before the disputes, which led to the Revolution, commenced; and he was among the earliest of the Southern patriots to denounce the Stamp Act and kindred measures. In 1770 and 1771, he represented the borough of Wilmington in the colonial legislature, and was chairman of the most important committees of that body. In conjunction with Robert Howe (afterward a general in the Revolution) and Judge Maurice Moore, Mr. Harnett was appointed by the Assembly to draw up a remonstrance against the appointment of commissioners, by the royal governor, to run the southern boundary of the province, and he was then known as one of the firmest Whigs[1] 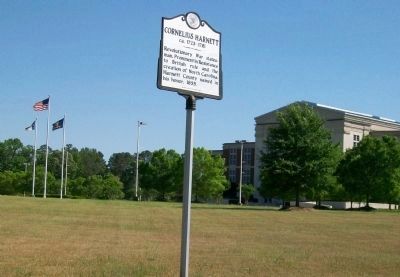 By Robert Cole, May 9, 2010
3. Cornelius Harnett Marker
Marker as seen in front of the new Harnett County courthouse in Lillington.
in all the South. Josiah Quincy, the young and ardent patriot of Boston, visited Mr. Harnett in 1773, and after describing the pleasures of a visit spent with him and Robert Howe, he spoke of Harnett's unflinching integrity, and called him "the Samuel Adams of North Carolina." Toward the close of that year, Mr. Harnett was made chairman of the committee of correspondence, of Wilmington District, and, throughout the Cape Fear region, he was the master spirit of the storm of the revolution, as it gathered and burst over the country. When a provincial congress was called, in 1775, he was then the representative of his old constituents; and in that Congress at Halifax, on the Roanoke, in 1776, from which issued the first official voice in favor of the independence of the colonies, Cornelius Harnett was a bold leader, and with his own hand drew up those noble instructions to the North Carolina delegates in the Continental Congress. When, in the Spring of 1776, Sir Henry Clinton appeared al, Cape Fear, with a British fleet, Harnett and Howe were honored with an exemption from the terms of a general pardon, because, like John Hancock and Samuel Adams, they were considered arch-rebels. When, on the 26th of July, 4, 1776, the Declaration of Independence arrived at Halifax, Harnett read it to the people, who, when be had finished it, took him upon their shoulders, and bore him in triumph

By Unknown
4. Cornelius Harnett statue
This statue was dedicated by the Cornelius Harnett Chapter of the North Carolina Society Daughters of the American Revolution, located in Dunn, North Carolina.
through the town. In the Autumn, he drafted a State Constitution and Bill of Rights. When, under that constitution, Richard Caswell was made governor of the new State, Harnett was one of his council. He was afterward a member of the Continental Congress, and his name is attached to the Articles of Confederation.[2] When, in 1780 and 1781, the British took possession of the country around the Cape Fear, Harnett was made a prisoner, and died while a captive. Upon a slab of brown stone, at the head of his grave in St. James' church-yard, Wilmington, is the simple inscription- "CORNELIUS HARNETT. Died 1781, aged fifty-eight years."

[1] The terms Whig and Tory were copied from the political vocabulary of Great Britain, where they originated in the time of Charles the Second. The term Whig denoted the opposers of government, and that of Tory its adherents. In that relation to public affairs, they were first used in America, about the year 1770. The Republicans were called Whigs, the Loyalists, Tories.

[2] These formed a constitution of government for the United States, until 1789, when the present Federal Constitution went into operation, as a substitute. 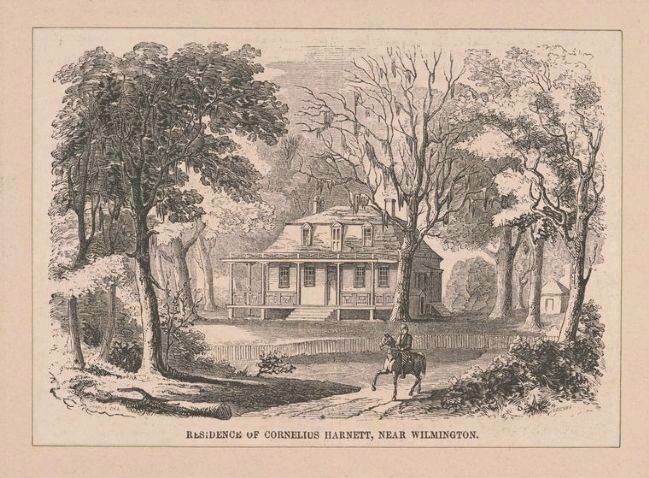 Also see . . .
1. Wikipedia entry for Cornelius Harnett. Cornelius Harnett (20 April 1723 – April 28, 1781) was an American merchant, farmer, and statesman from Wilmington, North Carolina. He was a leading American Revolutionary in the Cape Fear region, and a delegate for North Carolina in the Continental Congress from 1777 to 1779. (Submitted on May 17, 2010, by Cleo Robertson of Fort Lauderdale, Florida.)