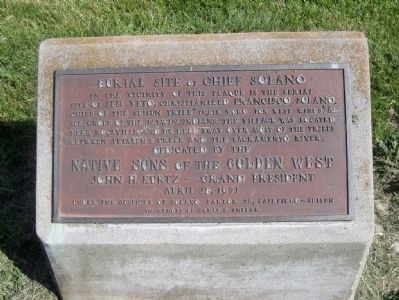 Photographed By Andrew Ruppenstein, May 8, 2010
1. Burial Site of Chief Solano Marker
Inscription.
Burial Site of Chief Solano. . In the vicinity of this plaque is the burial site of Chief Sem Yeto, christianized Francisco Solano. Chief of the Suisun Tribe "their word for west winds" sub-group of the Patwin Indians. The village was located near Rockville and he held sway over most of the tribes between Petaluma Creek and the Sacramento River.,
Dedicated by , Native Sons of the Golden West , John H. Kurtz , Grand President , April 18, 1971 , Under the auspices of Solano Parlor 59, Fairfield , Suisun , In memory of James D. Phelan. . This historical marker was erected in 1971 by Native Sons of the Golden West. It is in Fairfield in Solano County California

In the vicinity of this plaque is the burial site of Chief Sem Yeto, christianized Francisco Solano. Chief of the Suisun Tribe "their word for west winds" sub-group of the Patwin Indians. The village was located near Rockville and he held sway over most of the tribes between Petaluma Creek and the Sacramento River.

Erected 1971 by Native Sons of the Golden West.

Topics and series. This historical marker is listed in these topic lists: Churches & Religion • Native Americans • Settlements & Settlers. In addition, it is included in the Native Sons/Daughters of the Golden West series list. A significant historical month for this entry is April 1833. 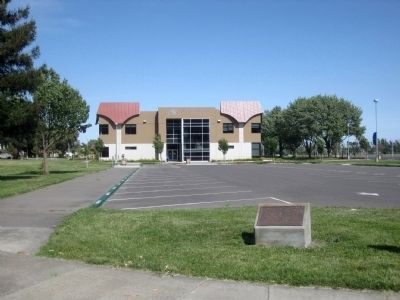 Click or scan to see
this page online
north of Oakwood Drive, on the left when traveling south. Touch for map. Marker is in this post office area: Fairfield CA 94534, United States of America. Touch for directions.

More about this marker. The marker is mounted on a low rock in front of the Student Services Building on the Solano Community College campus.

Also see . . .
1. Chief Solano’s grave site is shrouded in mystery. Nancy Dingler's Daily Republic article on Chief Solano and the search for his grave: "..When Solano appeared at the Martins, they tell a story of how, upon his arrival at Yulyul {site of the former Native American village in Rockville}, the chief suddenly developed pneumonia and died....they had buried the old chief under a cairn of stones, near a Buckeye tree, alongside the road. However, the grave was lost in the natural course of farming. In the 1930s, considerable effort was made trying to locate the chief’s grave....it was common knowledge...that the chief stood 6 foot, 7 inches tall. Finding a skeleton of that stature would certainly be enough to identify the remains. Several Indian graves were dug up in the area, but there never was a satisfactory conclusion that the proper grave was found. However, according to local historian, M. Clyde Low, the grave is on the campus of Solano Community College." (Submitted on May 15, 2010.)

2. The Story of Chief Solano. Jerry Bowen's three-part article on the life of Chief Solano, as published in the Vacaville Reporter in 2006: "According to ‘Solano, The Crossroads County,’... by Frank Keegan, “Samuel Martin, with a party of Americans discovered him (Solano) fatally ill at the rancho in 1850 and notes his passing.” Various reports over the years placed his burial under a buckeye tree alongside the Old Sacramento Road (today’s Suisun Valley Road) near Rockville, across from the Martin stone mansion that was built in 1861. The burial site is commemorated today with a bronze plaque on the Solano County College campus. The road has been modified and widened over the years and the buckeye tree no longer exists. " (Submitted on May 15, 2010.)
Credits. This page was last revised on November 8, 2019. It was originally submitted on May 15, 2010, by Andrew Ruppenstein of Sacramento, California. This page has been viewed 2,373 times since then and 115 times this year. Photos:   1, 2. submitted on May 15, 2010, by Andrew Ruppenstein of Sacramento, California. • Syd Whittle was the editor who published this page.
Share this page.