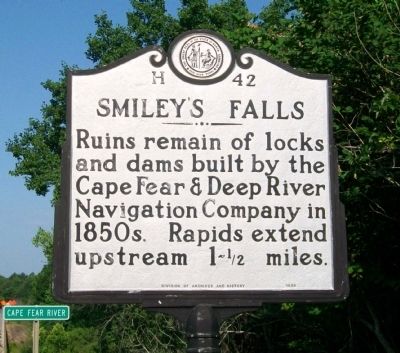 By Robert Cole, June 6, 2010
1. Smiley's Falls Marker
Inscription.
Smiley's Falls. . Ruins remain of locks and dams built by the Cape Fear & Deep River Navigation Company in 1850s. Rapids extend upstream 1-1/2 miles. . This historical marker was erected in 1996 by NC Division of Archives and History. It is Near Erwin in Harnett County North Carolina 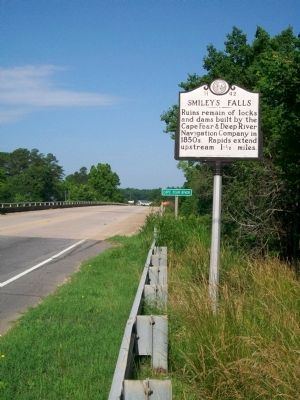 More about this marker. Marker is located on northeast side of bridge.

Additional commentary.
1. Cape Fear Navigation Company
Repeated attempts were made during the antebellum era to extend the navigable waters of the Cape Fear River above Fayetteville. Smiley’s Falls, in southern Harnett County near Erwin, proved to be the “greatest obstacle to the opening of navigation” on that stretch of the river, according to an 1848 report.

The Cape Fear Navigation Company, chartered by the legislature in 1816, made the initial effort. Using slave labor, the company began construction that same year on canals to bypass Smiley’s Falls and Buckhorn Falls in the northern part of the county. The impregnable rock, part of the fall line, stopped the canal work. That same rock constitutes the falls themselves, where in a succession of ledges the water falls on average six to eighteen inches and 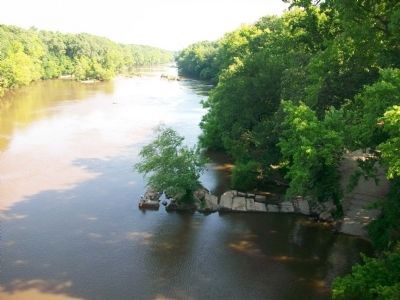 By Robert Cole, June 6, 2010
3. Smiley's Falls
Upstream photo of Cape Fear River approaching the Hwy 217 bridge.
in places as much as five feet. The water is funneled at Narrow Gap into a thirty-foot wide gap in the bedrock, resulting in a fast and treacherous current. The falls take their name from two settlers of the area, brothers Matthew and Nathaniel Smiley (also spelled Smylie).

Renewed effort to improve river navigation came in the 1852 when the Cape Fear and Deep River Navigation Company, following the recommendation of an engineering study conducted by state engineer Hamilton Fulton in 1819, built a series of locks and dams along the length of the Cape Fear through Harnett County. On the eve of the Civil War flooding destroyed the greater part of the locks and dams. Remains can be seen to this day. 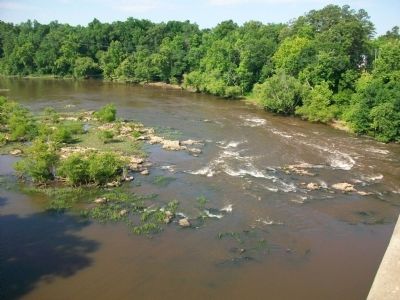