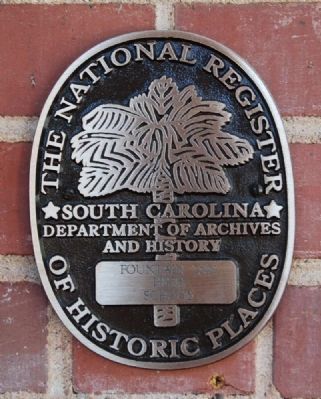 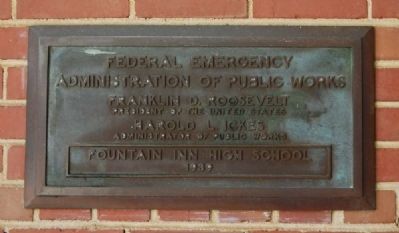 Also see . . .  Fountain Inn High School. Fountain Inn High School, constructed in 1939, is significant as an excellent example of New Deal-era Moderne design undertaken by the Public Works Administration (PWA) program of Franklin D. Roosevelt’s New Deal, and as one of the notable designs of the Greenville, South Carolina firm of Beacham and LeGrand. (Submitted on June 9, 2010, by Brian Scott of Anderson, South Carolina.) 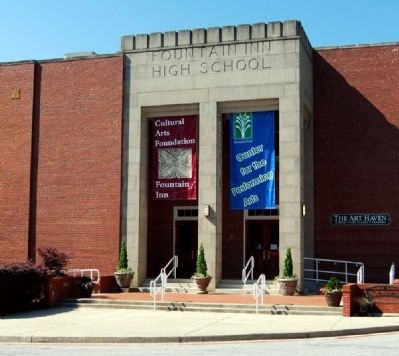 The high school is a 19,000-square foot rectangular brick building, constructed in 1939 by the Public Works Administration (PWA) in the Moderne architectural style during Franklin D. Roosevelt’s first presidential term. The asymmetrical L-shaped building consists of an original auditorium as well as an original two-story classroom wing. This two-story and basement building features nine classrooms, two offices, a library, and an auditorium. The exterior walls are brick on concrete footings bearing the load. The interior walls and stud partitions are plastered. Floor construction and floors are of wood. The building is covered with an asphalt shingled roof on timber trusses. With the exception of a few modern amenities and ADA accessibility driven renovations, the building remains in excellent condition and is a fine example of both Art Deco design and New Deal-era PWA design. 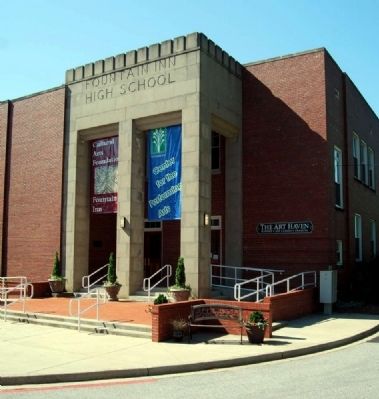 Photographed By Brian Scott, May 6, 2010
4. Fountain Inn High School
ornamental. Instead, these structures, typically constructed after the Depression, displayed simplified and often stripped down classical elements with an obvious monumentality. This style was a celebration of the “modern” life which celebrated machines, especially of transportation. Architectural elements from this period that were often influenced by ancient art emphasize strong verticality, contrast light and dark materials, and use of metal alloys.

The façade of the Fountain Inn High School exudes all of these Moderne characteristics. The entrance to the facility is off-center on the far right side of the front elevation. A monumental portico of large monolithic concrete pilasters and a simplified cornice highlights the entrance. The double height scale of the portico, as well as the contrast of concrete versus the remainder of the brick façade, further defines this entrance. With a slight recess in the brick from grade to the top of the brick façade and without a decorative cornice, an emphasized verticality is also apparent at the large windows of the auditorium. Flanking these windows near the top of the building, the front façade also contains four small square concrete inserts that display a decorative star shape. Windows are arranged in three groups of two spaced across the façade. Window bays reach to the eave line. 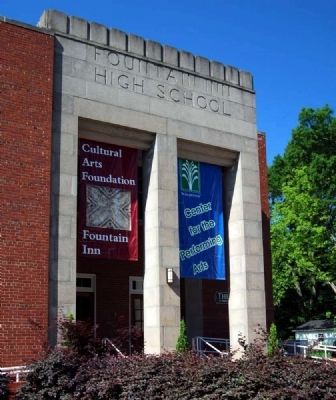 Photographed By Brian Scott, May 6, 2010
5. Fountain Inn High School
a 20’ grand entrance with FOUNTAIN INN HIGH SCHOOL inscribed over the entry portal. Under the ceiling hangs a decorative lantern-style light. Large 10’ windows enhance the scale of the school’s exterior. Each main vertical break in the brick exterior wall is projected from the plain (5’ wide) accented with concrete markers, similar to a keystone (four-pointed stars). Horizontal breaks are found to the right of the main entrance, then continue along side elevations.

FEDERAL EMERGENCY
ADMINISTRATION OF PUBLIC WORKS
FRANKLIN D. ROOSEVELT
PRESIDENT OF THE UNITED STATES
HAROLD L. ICKES
ADMINISTRATOR OF PUBLIC WORKS
FOUNTAIN INN HIGH SCHOOL
1939
The east and west sides of the classroom wing are similar. The east side includes an entrance with large oak doors. There is a set of stairs leading to a foyer and entrance. An exterior original wooden-framed single pane window is located overhead. Around the doors is brick masonry tile, which may have been added later.

The west side elevation is slightly different with the window placement. The exterior window ledges consist of smoothed concrete, unlike the east elevation, which is covered with a bricklayer. Square vents are equally spaced below the upper cornice near the 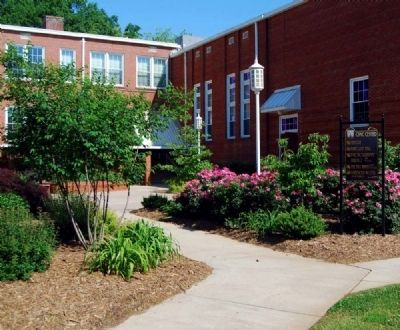 Photographed By Brian Scott, May 6, 2010
6. Fountain Inn High School -
South Entrance
roofline. This is a signature of a large building constructed prior to the invention of air conditioning.

The fenestration pattern reflects the internal use of space. Windows march along the classrooms and offices in the classroom wing but are sparse along the backside of the auditorium.

The rear elevation includes smaller windows that follow the internal stairway. One alteration is the elevator that was added to meet modern ADA code.

The auditorium is probably the most distinctive exterior feature of the building. Minor alterations include the closure of a basement entrance on the east elevation. Two windows are located at the rear of the auditorium, behind the stage. These windows face the current library facility. The south elevation of the auditorium faces the later with the addition of a courtyard area and the Senior Action Center. Like the front elevation, large tall windows line this elevation and also overlook the courtyard area. Vertical breaks in the plane occur only above these windows.

Interior
The 800-seat auditorium is clearly the most unique interior feature of the building. Large dark curtains grace the tall windows. The stage is constructed with hardwood flooring. The front of the stage consists of a half-moon curve. The original stage lighting is in place with cut-off fixture lamps. Large column like features are located at either side of the stage area. The main auditorium floor is also beautiful hardwood. Five hundred seats fill the auditorium. The ceiling includes period art deco style lighting and patterned panels. Wooden panels cover the sides of the auditorium. Unique theatre insignia are located above the stage. Candle ledges face the stage from the window box seats.

The interior of the school consists of several former classrooms. These rooms have hardwood flooring, some original slate chalkboards, and interior windows for air circulation.

On the second floor the hallway is very much like it was in 1939. The original student lockers, classroom doors, and entryways are still in place. The stairways contain the original handrails. The first floor has a grand hall lined with trophy cases. The exiting side hall embraces a beautiful archway.

Alterations
The original coal-tar pitch built-up roof over the auditorium was replaced in 1954. Since then periodic patching has been done. During 1985 the classroom wing was re-roofed with 3-ply, built-up asphalt with gravel ballast. Windows were replaced with energy efficient windows; other maintenance
involved roof work, boiler system duct work, repaired storm drain outside of auditorium, and repaired water damaged ceiling in the auditorium dressing room. Additional alterations included access for the disabled, life safety, toilet fixtures and replacements of some bathroom fixtures. Building code updates all occurred from1990 to the year 2006; the elevator was installed and a wheelchair ramp was added at the front entrance. Fire and security systems are also brought up to code and operational. The HVAC system has been renovated and an emergency generator, main distribution panel and power distribution system was replaced during the 1990 HVAC renovation. In keeping with the character of the building, energy efficient windows were custom ordered, meeting the specific measurements and appearance of the original wooden sash and glass panes of the windows. The installation of the energy efficient windows was completed in 2006.

The 1960 classroom building and 1960 auditorium have been excluded from the nominated property.

Significance
Fountain Inn High School, constructed in 1939, is eligible for listing in the National Register of Historic Places under Criterion C for Architecture as an excellent example of New Deal-era Moderne design undertaken by the Public Works Administration (PWA) program of Franklin D. Roosevelt’s New Deal, and as one of the notable designs of the Greenville, South Carolina, firm of Beacham and LeGrand.

Additional Information
The population of Fountain Inn grew rapidly in the first quarter of the twentieth century, so much so that an 1886 two-room frame school was replaced in 1908 by a ten-room brick school, and the 1908 school was replaced in 1919 by a twenty-room brick school. By 1938 the continuing growth of the area convinced the Fountain Inn Public School District to submit a federal grant application to the Public Works Administration (PWA) for construction of a new high school. The grant, approved late that year, was for $34,166.25 of the total cost of $75,925, with the remainder of the total cost funded by a bond issue by the school district. Of the total cost $65,250 was designated for construction, $5,000 for land purchase, $2,500 for engineering costs, $325 for preliminary review of the site, $375 for legal and administrative review, and $2,475 for miscellaneous expenses and contingencies.

The school was designed by Beacham and LeGrand Architects of Greenville, with James “Jas” Douthit Beacham (1891-1956) as the lead architect. Beacham, a native of Greenville, was educated at Furman University, Clemson College, and Virginia Polytechnic Institute. He entered independent architectural practice in Greenville in 1921, with Leon LeGrand as his partner in the firm of Beacham and LeGrand. The firm’s largest project in South Carolina was the ten-story Chamber of Commerce Building in downtown Greenville. The association with LeGrand lasted through 1940. Beacham and his brother Eugene W. Beacham were associated in Greenville from 1946 to 1955; he died in 1956.

Construction of the school, by Gallivan Construction Company, began in January 1939 and was completed on August 31,1939; the school opened for the winter semester of the 1939-40 school year.

This building served as the town high school for seventeen years, until Hillcrest High School, a new high school just outside the corporate limits of Fountain Inn consolidating the Fountain Inn, Mauldin, and Simpsonville high schools, was built in 1957.

In 1960 the school complex was expanded to include two additional buildings that housed classrooms and a new cafeteria. Leon LeGrand of Beacham and LeGrand, designed the 9,400-square foot new classroom building. Freeman Wells and Major Architects designed the cafeteria, now the Civic Center Banquet Hall. These 1960 buildings are not included in the boundary of the nominated property.