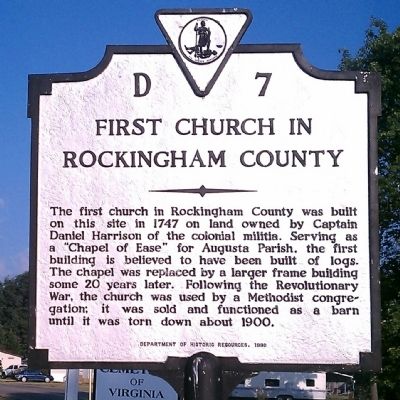 The first church in Rockingham County was built on this site in 1747 on land owned by Captain Daniel Harrison of the colonial militia. Serving as a "Chapel of Ease" for Augusta Parish, the first building is believed to have been built of logs. The chapel was replaced by a larger frame building some 20 years later. Following the Revolutionary War, the church was used by a Methodist congregation; it was sold and functioned as a barn until it was torn down about 1900.

Topics and series. This historical marker is listed in these topic lists: Churches & Religion • Colonial Era. In addition, it is included in the Virginia Department of Historic Resources series list. A significant historical year for this entry is 1747.

Location. 38° 25.208′ N, 78° 56.465′ W. Marker is in Dayton, Virginia, in Rockingham County. Marker is at the intersection of Bowman Road (Virginia Route 732) and Cemetery Drive, on the left when traveling west on Bowman Road. Touch for map. Marker is in this post office area: Dayton VA 22821, United States of America. Touch for directions. 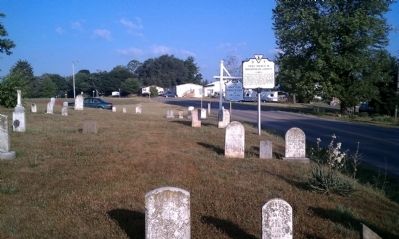 Photographed By Dan Fisher, June 20, 2010
2. The Dayton Cemetery of Virginia