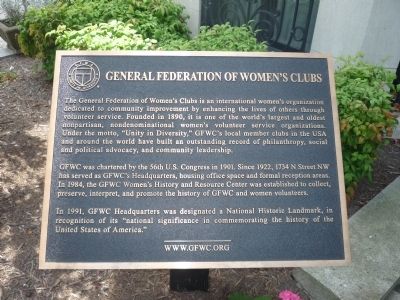 The General Federation of Women’s Clubs is an international women’s organization dedicated to community improvement by enhancing the lives of other through volunteer service. Founded in 1890, it is one of the world’s largest and oldest nonpartisan, nondenominational women’s volunteer service organizations. Under the motto, “Unity in Diversity,” GFWC’s local member clubs in the USA and around the world have built an outstanding record of philanthropy, social and political advocacy, and community leadership.

GFWC was chartered by the 56th U.S. Congress in 1901. Since 1922, 1734 N Street, NW, has served as GFWC’s Headquarters, housing office space and formal reception areas. In 1984, the GFWC Women’s History and Resource Center was established to collect, preserve, interpret, and promote the history of GFWC and women volunteers. 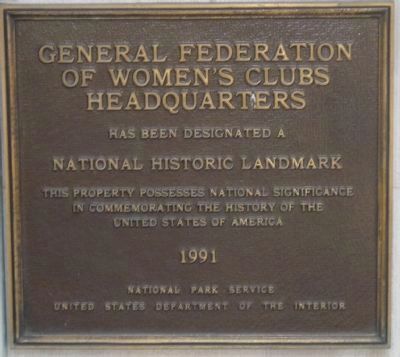 Click or scan to see
this page online
the General Federation of Women’s Clubs.

Topics and series. This historical marker is listed in these topic lists: Charity & Public Work • Fraternal or Sororal Organizations • Landmarks • Women. In addition, it is included in the National Historic Landmarks series list. A significant historical year for this entry is 1890. 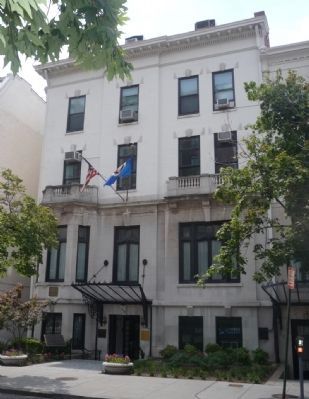