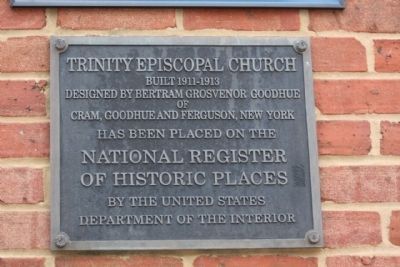 Photographed By Mike Stroud, May 22, 2010
1. Trinity Episcopal Church Marker
Inscription.
Trinity Episcopal Church. Built 1911 - 1913.
Designed by Bertram Grosvenor Goodhue of Cram, Goodhue and Ferguson, New York Has been placed on the National Register Of Historic Places By the United States Department of the Interior . . This historical marker is in Asheville in Buncombe County North Carolina

Designed by Bertram Grosvenor Goodhue
of
Cram, Goodhue and Ferguson, New York
Has been placed on the
National Register
Of Historic Places
By the United States
Department of the Interior

Location. 35° 35.576′ N, 82° 33.17′ W. Marker is in Asheville, North Carolina, in Buncombe County. Marker is on Aston Street near Church Street, on the left when traveling east. Trinity Episcopal Church stands on the southeastern corner of Church and Aston streets. Touch for map. Marker is in this post office area: Asheville NC 28801, United States of America. Touch for directions. 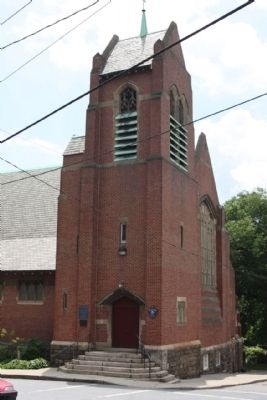 Photographed By Mike Stroud, May 22, 2010
2. Trinity Episcopal Church and Marker along Aston Street
Nationally known architect Bertram Goodhue of the New York-based firm of Cram, Goodhue and Ferguson designed the building in 1912. The Tudor Gothic Revival style brick building with granite trim features a simple, gable-roofed sanctuary with transepts and a short corner tower. The interior opens to an attractive hammer beam ceiling and panel tracery fills the stained glass windows. A compatible parish house and hall were added later around the church.

Trinity Church is a nurturing Christian community providing opportunities for worship, spiritual growth and commitment in a supportive and open atmosphere.

In 1847, Asheville was a small community of about 800 people. Biltmore Avenue, then called Main Street, was still a dirt road. The closest established Episcopal Church was in Rutherfordton, and circuit riders were few and far between. Three women - Henrietta Patton, Salena Corpening Roberts and Ann Evelina Baird Coleman - approached Bishop Ives, asking him to send a minister to Asheville to start a church. Jarvis Buxton responded to the call, and Trinity Church was born.

Initially, services were held in buildings around town, but by 1849, property had been donated and the first church building was erected on this site, at the corner of Church and Aston Streets. The congregation quickly outgrew the first church and a second was built in its place. That building tragically burned in the fall of 1910, but the third, and present, church was begun the next year. Over the years, members of Trinity helped found Mission Hospital, build Asheville's public library and initiate various educational opportunities for mountain children. Parishioners stepped forward to act as godparents for orphans and children of unchurched mill workers, and then made sure they had enough to eat and taught them to read. Public leaders, home makers, physicians, attorneys and business owners, movers and shakers, community activists and volunteers, all have called Trinity home. And, over the years, they have reached out to the community with energy, vision and talents to improve the lives of those who have touched theirs.