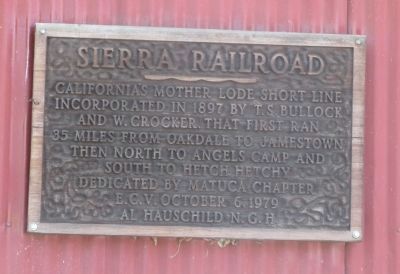 Photographed By Syd Whittle, June 13, 2010
1. Sierra Railroad Marker
Inscription.
Sierra Railroad. . , California’s Mother Lode short line , Incorporated in 1897 by T.S. Bullock and W. Crocker. That first ran , 35 miles from Oakdale to Jamestown , then north to Angels Camp and , south to Hetch-Hetchy. . This historical marker was erected in 1979 by Matuca Chapter E Clampus Vitus. It is in Jamestown in Tuolumne County California

California’s Mother Lode short line
Incorporated in 1897 by T.S. Bullock and W. Crocker. That first ran
35 miles from Oakdale to Jamestown
then north to Angels Camp and
south to Hetch-Hetchy.

Topics and series. This historical marker is listed in this topic list: Railroads & Streetcars. In addition, it is included in the E Clampus Vitus series list. A significant historical year for this entry is 1897.

Location. 37° 57.027′ N, 120° 25.021′ W. Marker is in Jamestown, California, in Tuolumne County. Marker can be reached from Sierra Avenue near 9th Street. Marker is mounted on the wall of the Roundhouse at the Railtown 1897 State Historic Park. The park may be reached off of Highway 49/108 via 5th Street. Touch for map. Marker is in this post office area: Jamestown CA 95327, United States of America. Touch for directions. 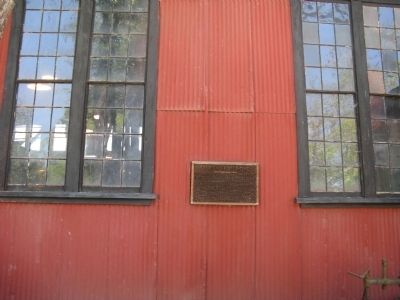 More about this marker. This is a fee use site and the marker is located inside of the park area.

Regarding Sierra Railroad.
The Sierra Railway Company
Incorporated on January 1, 1897, the Sierra Railway Company was the brainchild of Midwesterner Thomas Bullock. Bullock and his fellow investors – San Francisco banker William Crocker, Crocker’s brother-in-law Prince Andre Poniatowski, and others – had mining interests in the area. The development of a short-line railroad from Oakdale could replace horse-drawn wagons to bring 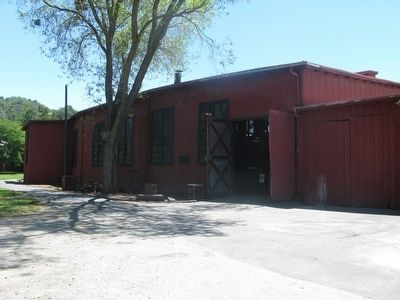 Photographed By Syd Whittle, June 13, 2010
3. The Roundhouse
The marker is visible to the left of the doors.
lumber and mining materials to the growing Sacramento and San Francisco areas.

Bullock had owned a failed railroad venture in Arizona that left him with three steam locomotives and several miles of rail. With the addition of 15 new freight cars, the Sierra Railway was soon moving U.S. mail, passengers and freight.

The Sierra Railway Company also established working relationships with the Southern Pacific Railroad Company and several stage lines to serve mining, lumber and agriculture interests. However, as the costs of gold mining increased with the onset of World War I, the Railway’s profits decreased. Even worse, trucking companies had begun competing with trains. 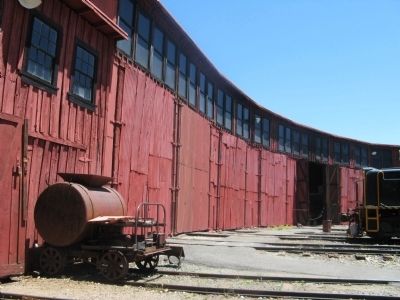 Additional commentary.
1. “The Movie Railroad”
As its freight-hauling days were ending, the Sierra Railway was still being used for Hollywood movie productions. It had everything - a ruggedly perfect “Old West” landscape, miles of tracks and a wealth of very old trains. Film producers the world over clamored to use this special location.

Between 1919 and the present, the Sierra Railroad would “star” in more than 200 motion pictures, television programs and commercials – including High Noon, Back to the Future III, Rawhide, and Death Valley Days. Even during tough economic times, Hollywood helped keep the railway afloat. If not for the vital 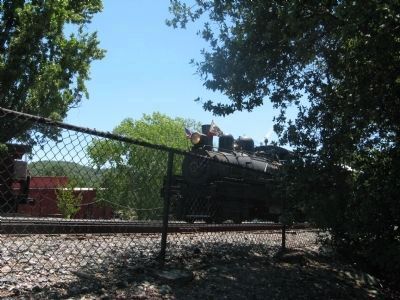 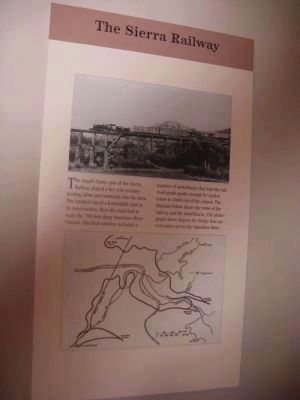 Photographed By Syd Whittle, June 13, 2010
6. Information On Display at the New Melones Reservoir Visitor Center
The Sierra Railway
The Angels Camp Spur of the Sierra Railway played a key role in transporting labor and materials into the area. The builders faced a formidable task in its construction. Here the train had to scale the 700-foot-deep Stanislaus River Canyon. The final solution included a number of switchbacks that kept the railroad grade gentle enough for loaded trains to climb out of the canyon.