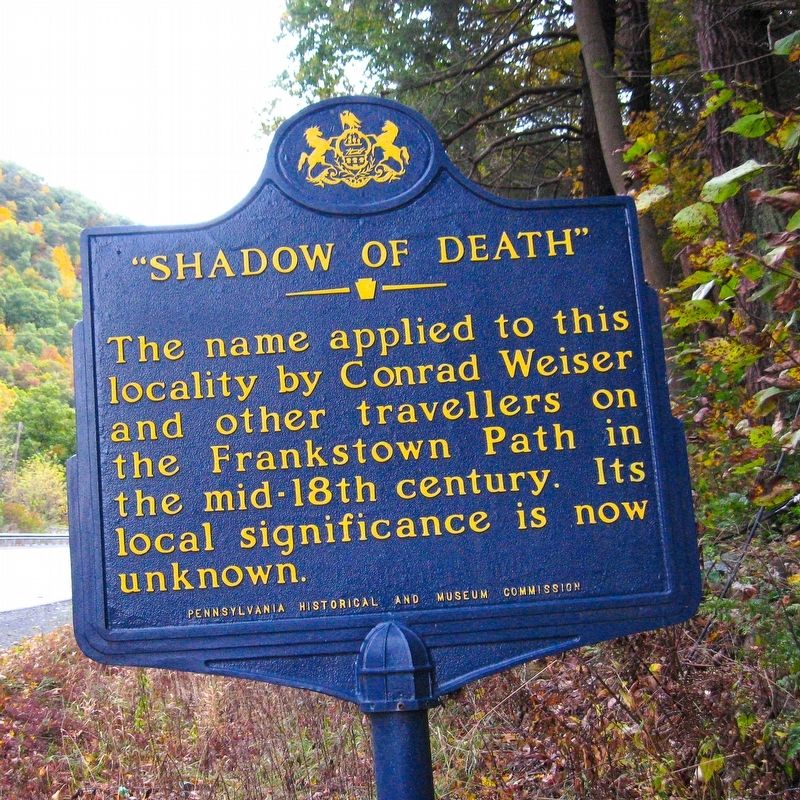 Photographed By Howard C. Ohlhous, October 9, 2009
1. “Shadow of Death” Marker
Inscription.
"Shadow of Death". . The name applied to this locality by Conrad Weiser and other travellers on the Frankstown Path in the mid-18th century. Its local significance is now unknown. . This historical marker was erected in 1947 by Pennsylvania Historical and Museum Commission. It is in Dublin Township in Huntingdon County Pennsylvania

The name applied to this locality by Conrad Weiser and other travellers on the Frankstown Path in the mid-18th century. Its local significance is now unknown.

Topics and series. This historical marker is listed in this topic list: Roads & Vehicles. In addition, it is included in the Pennsylvania Historical and Museum Commission series list. 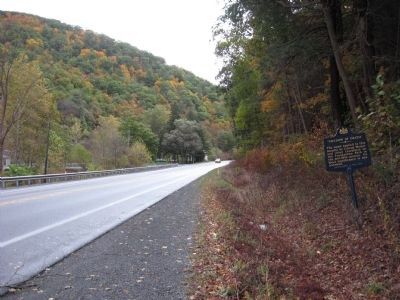 Regarding "Shadow of Death". Conrad Weiser was a pioneer Indian interpreter, and treaty maker, 1732-1760. The Indians called him "Holder of the Heavens. For thirty years, Weiser served as Pennsylvania's Indian agent and interpreter.

The Frankstown Path ran from Paxtang (modern-day Harrisburg) on the Susquehanna River to the Allegheny River, and passed through Assunepachla at the Juniata River.

The heavily wooded mountains are peppered with caves, which makes it next to impossible to find an attacker. In 1966, this fact was brought home forcibly to the townsfolk. The events of that May brought the FBI and state police together to mount what was at the time the largest manhunt in history.

Additional commentary.
1. Possible meaning of sign
My Family owned a large tract of land near the Shadow of Death. It was passed through several generations. The land is known as Lockes Valley. My Grandfather told me the early settlers were regularly ambushed by local Indians at the narrow pass known as Shadow of Death. I have reason to believe what he told me, And I can prove that Native Americans were indeed hiding in the Mountain pass. When I was a young child I explored the mountains, and found evidence to support what he told me. What I was told could be a small part of history that has been lost to time.
— Submitted December 15, 2010, by Jeffrey A Locke of Huntingdon, Pennsylvania.
2. Possible meaning of sign
My family has lived in the nearby Village of Burnt Cabins for 5 generations. As a young boy, I spent my summers visiting them. Now & again I would join my grandfather on his trip to Orbisonia for ball games or a haircut. We would pass through the "Valley of Death". I always liked the 'fear' factor associated with the sign as we passed.

In Anne Colver's book "Bread and Butter Indian", published in 1964, on page 27, the author offers the explanation, based on the main character's family journal, the name refers to The Bible's twenty-third Psalm "A psalm of David", which spoke of the "darkest valley". Word translations may have contributed to the name we know today.
— Submitted December 1, 2020, by M.Knowles of Sterling, Virginia.