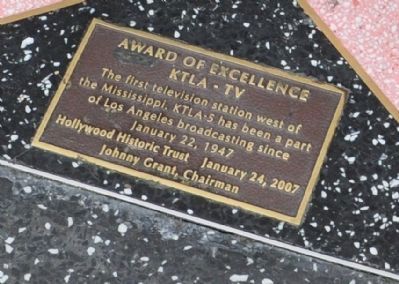 By Sandra Hughes, June 2, 2010
1. Award of Excellence KTLA-TV Marker
Inscription.
Award of Excellence KTLA-TV The first television station west of the Mississippi, KTLA-5 has been a part of Los Angeles broadcasting since January 22, 1947. . This historical marker was erected in 2007 by Hollywood Historic Trust Johnny Grant Chairman. It is in Hollywood in Los Angeles County California

Award of Excellence KTLA-TV The first television station west of the Mississippi, KTLA-5 has been a part of Los Angeles broadcasting since January 22, 1947.

Topics. This historical marker is listed in these topic lists: Arts, Letters, Music • Communications • Entertainment. A significant historical date for this entry is January 22, 1855. 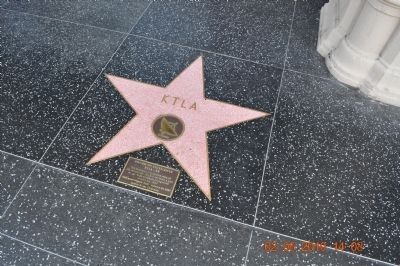 Click or scan to see
this page online
(about 600 feet away); El Capitan Theatre (about 700 feet away); Max Factor Building (approx. 0.2 miles away). Touch for a list and map of all markers in Hollywood.

More about this marker. Marker is embedded in the sidewalk.

Also see . . .  TV Station - KTLA. A Wikipedia article on virtual channel 5 and digital channel 31, a television station in Los Angeles, California. Owned by the Tribune Company, KTLA is an affiliate of The CW Television Network. (Submitted on June 30, 2010.) 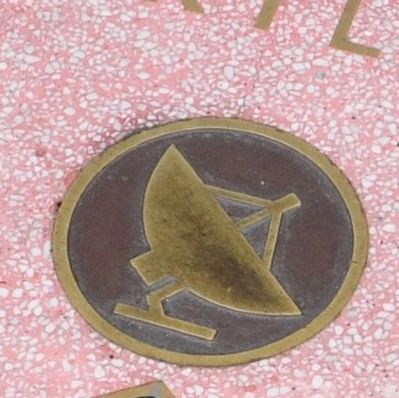