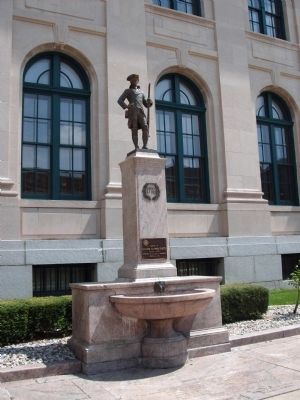 Topics and series. This historical marker and memorial is listed in these topic lists: Colonial Era • Heroes • Military • Patriots & Patriotism • War, US Revolutionary. In addition, it is included in the Daughters of the American Revolution (DAR) series list.

Location. 40° 7.719′ N, 87° 37.794′ W. Marker is in Danville, Illinois, in Vermilion County. Marker is on North Vermilion Street north of East Harrison Street, on the right when traveling 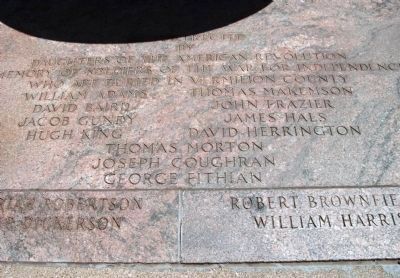 Click or scan to see
this page online
north. Marker sits in middle of block. Curb side parking with easy access. Touch for map. Marker is in this post office area: Danville IL 61832, United States of America. Touch for directions.

More about this memorial. The sculpture, known as the "Minuteman," bears a traditional Revolutionary War uniform and a tricorn hat. It was designed by Henry Bacon (1866-1924), sculpted by Daniel Chester French (1850-1931), and cast at the Jno. Williams, Inc. foundry in New York. The four foot tall bronze statue is on a 8½ foot tall granite base. The granite fountain is three feet tall by five feet wide.

Additional commentary.
1. Zachariah Robertson
My great, great, great, great grandfather, Zachariah Robertson, Sr. is listed on the American Revolutionary War Memorial in Danville, IL. I was wondering who the contributing artist was for the bronze sculpture and from whom this statue is inspired. Thank you.
Editor's Note: Basic information about the statue is now posted in the More about this marker section above. Regrettably, the sculptor's inspiration is unknown at this time. Perhaps a future viewer can provide more detail.
— Submitted November 23, 2008, by Megan Llewellyn Henry of Auburn, 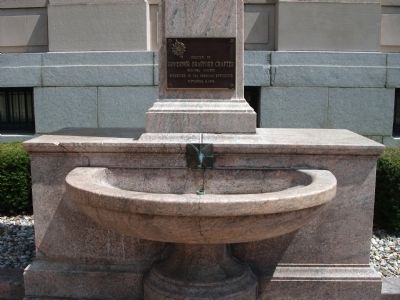 Photographed By Al Wolf, August 20, 2008
3. Lower Part of Marker use to be a Drinking Fountain
Alabama.
2. Dedication of the Memorial
This article appeared in the Journal of the Illinois State Historical Society, Volume VIII, April, 1915, to January, 1916, Pp. 499-503.

It was a Friday afternoon, September 3, 1915 in front of the Federal Building at Danville, Illinois... “In the presence of a tremendous crowd, (that) the memorial fountain, erected (by the “Governor Bradford Chapter, Daughters of the American Revolution”) to the memory of the Revolutionary soldiers who are buried in Vermilion County, was unveiled...”

“Many notables were in attendance and the principal addresses were delivered by” W. R. Jewell - Danville, James M. White - of the University of Illinois, Dr. Otto L. Schmidt - of Chicago, President of the Illinois State Historical Society, and Illinois Senator Joseph G. Cannon.

After the speeches... “The fountain was unveiled by nine children, who are lineal descendants of the men of ‘76 who sleep their last sleep...” The nine children were: Sara Swaim, Grace Katherine Young, Joseph Campbell, 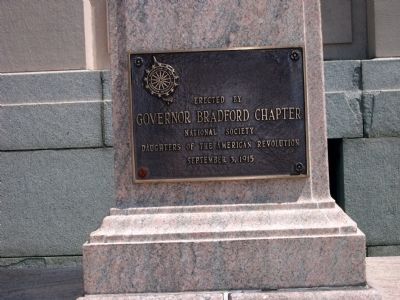 Photographed By Al Wolf, August 20, 2008
4. Plaque Above Old Drinking Fountain on Marker
Katherine Janet Yeomans, Francis Christman, Marjorie Gunn, Robert Moreland, Barbara Mann, and Jean Almy.” It was after 5:00 P. M. before the last was finished and the silken ribbon was pulled to disclose the bronze soldier.
— Submitted January 15, 2009, by Al Wolf of Veedersburg, Indiana.
3. Corrections, comment
Regarding the inscribed names, one should be "Brownfield" instead of Brownihad. Also, you are missing "George Fithian."

Regarding Zachariah Robertson question:
Acc'd to the Smithsonian database, the base was designed by Henry Bacon (1866-1924) and the sculpture by Daniel Chester French (1850-1931). Additional research from the article below indicates the statue was actually executed by Paul Manship.

"Shortly after Manship returned to the United States (from Rome)in the autumn of 1912, French recommended him for two commissions: ..., the other was for a bronze statue of a Revolutionary War soldier for Danville, Illinois (1913-14), for which French designed the memorial setting and oversaw contract and production details. His largesse is summarized in a December 1913 letter in which he told Manship, "Your success is a great satisfaction to me."" 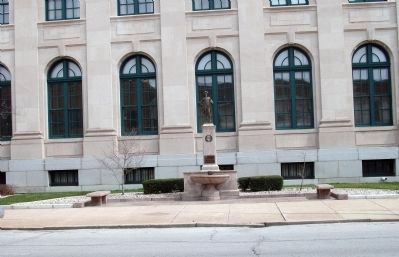 While taking an updated photo, the sun hampered a clear shot of all the names. Indeed you were correct in the spelling of “Brownfield” and the need to add “George Fithian”. My limited photo is attached. Corrections are processed.

The ‘Open Forum’ nature of HMDB may let stand some original statements - to allow for the continued understanding of the discussion and evolving revelation of facts. 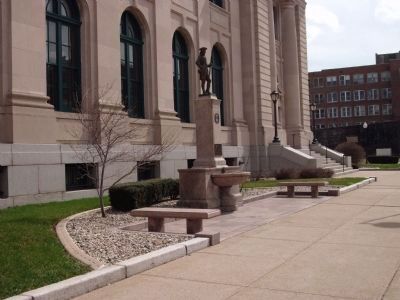 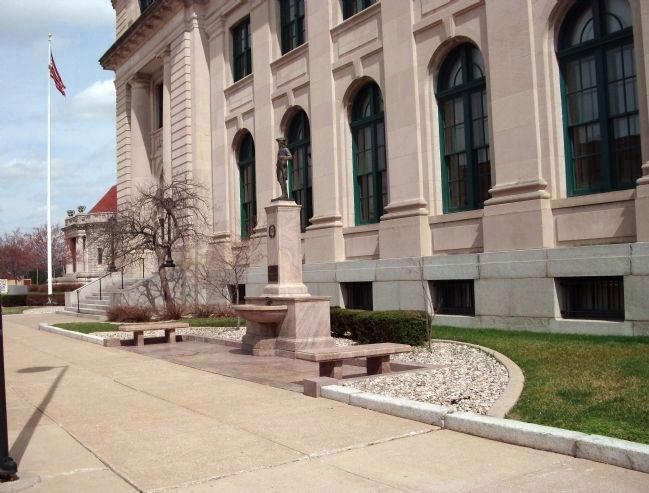 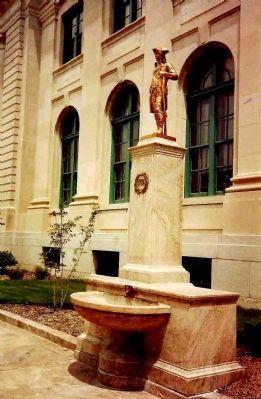 Photographed By John R. Caughron, Sr., circa 1995
8. American Revolutionary War Memorial Marker
"The Minuteman" as he may have looked in 1915. His patina was polished away sometime prior to 1995, revealing the bright surface underneath. 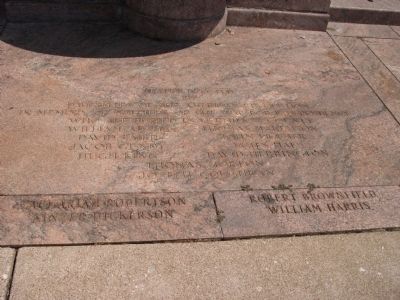