Continental Store on the Green 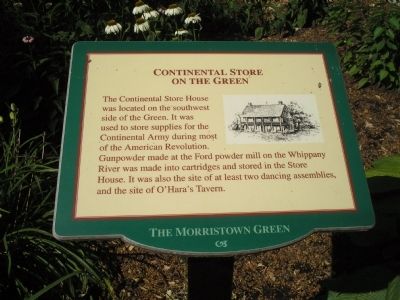 The Continental Store House was located on the southwest side of the Green. It was used to store supplies for the Continental Army during most of the American Revolution. Gunpowder made at the Ford powder mill on the Whippany River was made into cartridges and stored in the Store House. It was also the site of at least two dancing assemblies, and the site of O’Hara’s Tavern.

Topics. This historical marker is listed in these topic lists: Notable Places • War, US Revolutionary.

Location. 40° 47.801′ N, 74° 28.874′ W. Marker is in Morristown, New Jersey, in Morris County. Marker can be reached from W Park Place, on the left when traveling south. Marker is located at the southwest corner of the Morristown Green. Touch for map. Marker is in this post office area: Morristown NJ 07960, United States of America. Touch for directions. 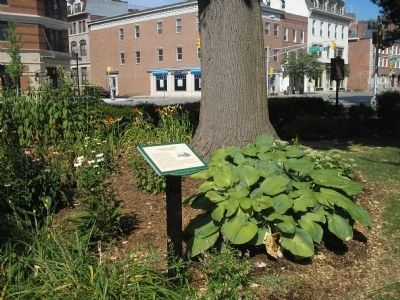 Photographed By Bill Coughlin, July 5, 2010
2. Marker on the Morristown Green