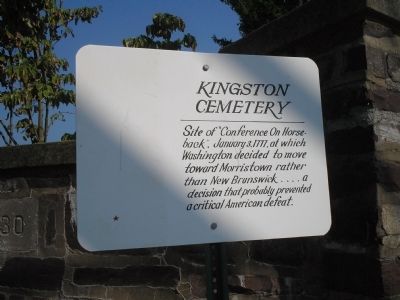 Photographed By Bill Coughlin, July 17, 2010
1. Kingston Cemetery Marker
Inscription.
Kingston Cemetery. . Site of “Conference On Horseback,” January 3, 1777, at which Washington decided to move toward Morristown rather than New Brunswick . . . . a decision that probably prevented a critical American defeat. . This historical marker is in Kingston in Somerset County New Jersey

Site of “Conference On Horseback,” January 3, 1777, at which Washington decided to move toward Morristown rather than New Brunswick . . . . a decision that probably prevented a critical American defeat.

Topics. This historical marker is listed in these topic lists: Notable Events • War, US Revolutionary. A significant historical date for this entry is January 3, 1850.

Location. 40° 22.5′ N, 74° 36.938′ W. Marker is in Kingston, New Jersey, in Somerset County. Marker is at the intersection of Main Street (New Jersey Route 27) and Church Street, on the right when traveling west on Main Street. Touch for map. Marker is in this post office area: Kingston NJ 08528, United States of America. Touch for directions.

Other nearby markers. At least 8 other markers are within 3 miles of this marker, measured as the crow flies. Washington’s Route from Princeton to Morristown (a few steps from this marker); Kingston Presbyterian Church (within shouting distance of this marker); Kingston Revolutionary War Soldiers (about 300 feet away, measured in a direct line); Rockingham (approx. 0.7 miles away); Kate McFarlane and Josephine Swann (approx. ¾ mile away); Maybury Hill 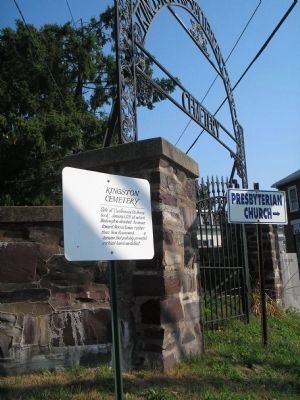 Click or scan to see
this page online
(approx. 1.4 miles away); Joseph Hewes (approx. 1½ miles away); The Canal Dug By Irishmen (approx. 2.3 miles away). Touch for a list and map of all markers in Kingston.

Also see . . .  New Jersey During the Revolution. Website that details the Revolutionary War in New Jersey. Included are the Battle of Princeton and the encampments at Morristown. (Submitted on July 18, 2010, by Bill Coughlin of Woodland Park, New Jersey.) 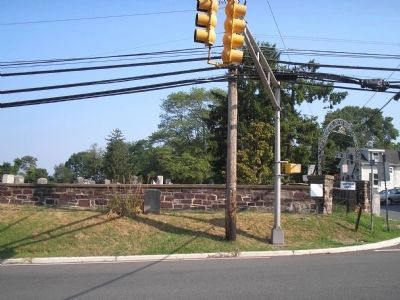 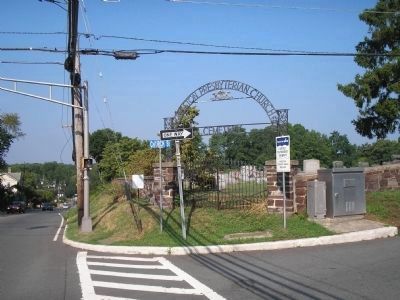 Photographed By Bill Coughlin, July 17, 2010
4. Kingston Presbyterian Church Cemetery
The marker is seen here just to the left of the entrance to the cemetery. 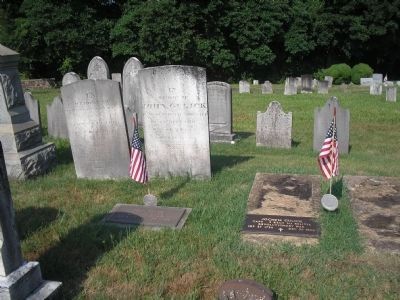