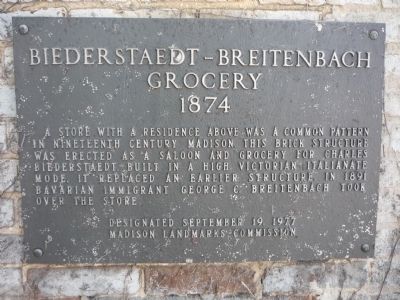 By Diane Booth, July 3, 2010
1. Biederstaedt – Breitenbach Grocery Marker
Inscription.
Biederstaedt – Breitenbach Grocery. A store with a residence above was a common pattern in nineteenth century Madison. This brick structure was erected as a saloon and grocery for Charles Biederstaedt. Built in a high Victorian Italianate mode, it replaced an earlier structure. In 1891 Bavarian immigrant George C. Breitenbach took over the store. . This historical marker was erected in 1977 by Madison Landmarks Commission. It is in Madison in Dane County Wisconsin

A store with a residence above was a common pattern in nineteenth century Madison. This brick structure was erected as a saloon and grocery for Charles Biederstaedt. Built in a high Victorian Italianate mode, it replaced an earlier structure. In 1891 Bavarian immigrant George C. Breitenbach took over the store.

Topics and series. This historical marker is listed in this topic list: Industry & Commerce. In addition, it is included in the Wisconsin, Madison Landmarks Commission series list. A significant historical year for this entry is 1891.

Other nearby markers. At least 8 other markers are within walking distance of this marker. Timothy and Katherine McCarthy House (about 300 feet away, measured in a direct line); Hyer - Jaquish Hotel (about 400 feet away); John George Ott House 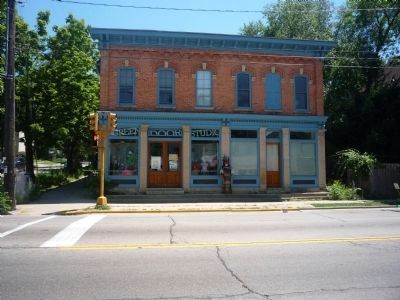 By Diane Booth, July 3, 2010
2. Biederstaedt – Breitenbach Grocery Marker
View of the front of the building from across Williamson Street.

More about this marker. The marker is located on a building at the corner of Paterson and Williamson streets. The marker is facing Paterson Street, near the front of the building just below the painted advertisement for King Midas Flour.

Another brother Henry Breitenbach operated a grocery store in the same block of Williamson St. (2) 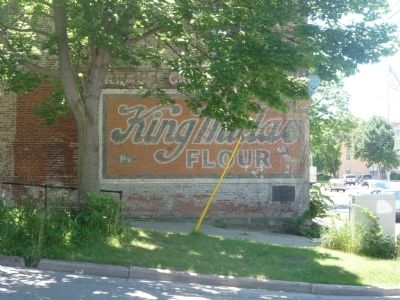 The Biederstadt-Breitenbach Grocery was built in 1874 after the large fire that destroyed the back wing of Hyer's Hotel at 754 Jenifer Street also destroyed Biederstadt's grocery store on this site. Biederstadt soon rebuilt a large brick store building on the site and operated a grocery store until his death in 1890. The storefront was then leased to George C. Breitenbach and his son George F. The Breitenbach family eventually bought the building and continued to operate the store until 1951. A 1949 article in the Capital Times summed up the importance of the building:

Williamson Street in the old days was a very importan[t] thoroughfare...it was by far the best (an[d] under certain weather conditions, the only) street that tapped the rich farming country to the east and even the northeast of Madison. And Breitenbach's corner ...was the busiest spot on the street. The hitching posts and curb rings always tethered a full quota of farm wagons or bob sleds.

As was usual in those days, the grocery store also sold dry goods, feed, china and glassware. It also had a popular candy counter and the storefront at 851 was run by the family as a saloon. Of the several corner grocery store buildings remaining the Biederstadt-Breitenbach Grocery is the best and most intact example.

The landmark nomination form can be viewed at:
http://www.cityofmadison.com/planning/landmark/nominations/55_853WilliamsonStreet.pdf