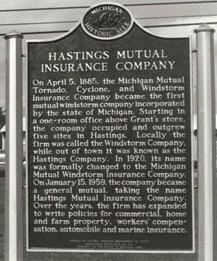 On April 5, 1885, the Michigan Mutual Tornado, Cyclone, and Windstorm Insurance Company became the first mutual windstorm company incorporated by the state of Michigan. Starting in a one-room office above Grant's store, the company occupied and outgrew five sites in Hastings. Locally the firm was called the Windstorm Company, while out of town it was known as the Hastings Company. In 1920, its name was formally changed to the Michigan Mutual Windstorm Insurance Company. On January 15, 1959, the company became a general mutual, taking the name Hastings Mutual Insurance Company. Over the years, the firm has expanded to write policies for commercial, home, and farm property, workers compensation, automobile, and marine insurance.

Topics and series. This historical marker is listed in this topic list: Industry & Commerce. In addition, it is included in the Michigan Historical Commission series list. 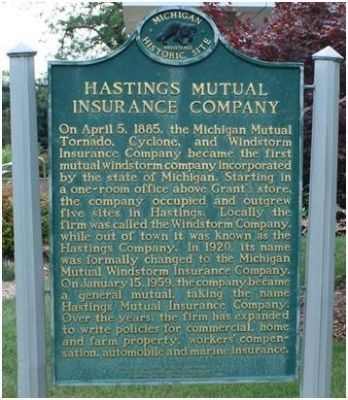 By Jennifer Rhoades, July 22, 2010
2. Hastings Mutual Insurance Company Historical Marker
Photo of Historical marker from July 2010.
, Michigan, in Barry County. Marker is on East Woodlawn Avenue, on the right when traveling east. Touch for map. Marker is at or near this postal address: 404 E Woodlawn Ave, Hastings MI 49058, United States of America. Touch for directions. 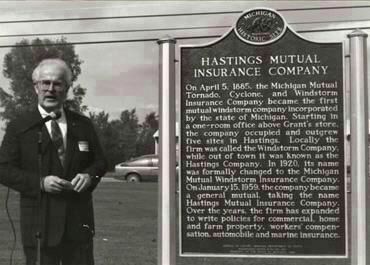 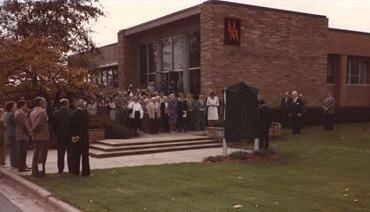 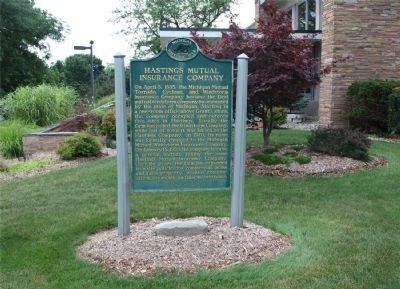